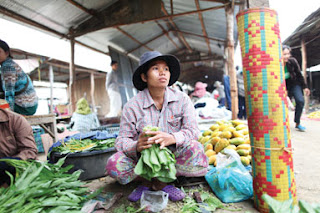 A woman prepares to sell vegetables at a market near the Poipet border crossing last month. Photo by: Will Baxter
http://www.phnompenhpost.com/


via CAAI
Thursday, 28 April 2011 15:00Sieam Bunthy
PRIME Minister Hun Sen yesterday said Cambodia has alternatives to purchasing Thai goods, as officials claimed two closed border gates in Oddar Meancheay province have disrupted local commerce.
The premier said the Kingdom could easily look to other markets to supply its needs.
“If Thailand closes the border, Cambodia will stop purchasing all goods from Thailand,” he said in a speech yesterday at Phnom Penh’s Peace Palace.
“If it’s closed, how are goods to be imported? And Cambodia will stop using Thai products from now on.”
He said Cambodia could find ready suppliers in other nations with which it did business, such as Vietnam and China.
“They want to sell a lot of goods to Cambodia,” he said.
Neth Dara, chief of the Choam Sa-ngam international border crossing, said yesterday the gate had remained closed beginning on April 22 by authorities on the Thai side, allowing no bilateral trade to be conducted. Many locals had also left the area due to increased tensions, he added.
“This has extremely affected the living standards of the people, because they cannot exchange goods, and also have to flee from their jobs and houses,” he said.
O’Smach international crossing has also remained closed during the fighting, according to its Deputy Director Nguy Cheang. He echoed complaints that closed crossings have affected local commerce.
Commercial officials from the Thai Embassy in Phnom Penh could not be reached for comment yesterday.
However, Thai businesspeople are calling for a quick resolution to border disputes with Cambodia, warning that continued clashes will hurt border trade and bilateral investment sentiment.
“Authorities need to be cautious concerning relations, because if they keep fighting, it will be difficult to negotiate,” said Thanit Sorat, vice chairman of the Federation of Thai Industries.
He added suggestions that businesses play a role in restoring the relationship between the two countries, as outside discussions can be arranged easily.
ADDITIONAL REPORTING BY TOM BRENNAN AND THE BANGKOK POST
Posted by CAAI News Media at 9:27 pm