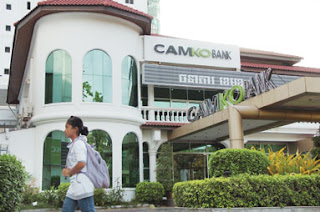 A girl walks past Camko Bank on Norodom Boulevard in Phnom Penh earlier this week. The bank is set to be downgraded in July. Photo by: Hong Menea
http://www.phnompenhpost.com/
via CAAI
Wednesday, 11 May 2011 15:00Jeremy Mullins and Tom Brennan
CAMKO Bank is in talks to downgrade from a commercial bank to a specialised bank, according to National Bank of Cambodia Director General and Spokeswoman Nguon Sokha.
Camko’s “voluntary downgrade” would likely be the last such transition following a central bank requirement to triple the capital at commercial banks, she said.
Officials at Camko did not return requests for comment.
However, a teller at the lone branch in Phnom Penh, on Norodom Boulevard, told reporters the bank was not accepting new depositors and that Camko’s downgrade to a specialised bank would be completed in July. Specialised banks differ from commercial banks in that they cannot accept deposits.
In a 2008 prakas, or edict, the NBC announced that by the end of 2010, commercial banks must have a minimum of at least 150,000,000,000 riel (US$37 million) unless at “least one influential shareholder [is] a bank or financial institution” with a rating “investment grade,” according to an unofficial translation.
Late last year, Angkor Capital Bank officials announced it would transition to a specialised bank in order to focus on its core competencies of lending and loan syndication in a competitive sector.
Nguon Sokha said on Monday that the National Bank of Cambodia’s intent with the prakas was to focus on “strengthening the law and the quality of banking in Cambodia”.
In 2009, the last year for which the NBC’s figures are available, Camko Bank held about US$45.2 million in assets, comprising a 0.9-percent share of the Cambodian banking market.
Posted by CAAI News Media at 9:15 pm