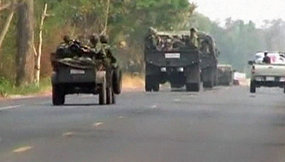 The border dispute between the two members of ASEAN has erupted into clashes several times since 2008. [ABC TV]
http://www.radioaustralianews.net.au/


via CAAi
Thailand's Foreign Minister Kasit Piromya says his government is likely to sign a deal to station Indonesian observers on the Thai-Cambodia border.
However, he says Cambodia must withdraw its troops and civilians from disputed areas for the deal to go through.
Cambodia says it will not withdraw its troops and civilians, according to Kyodo newsagency.
Mr Kasit made the statement after returning from the Association of South East Asion Nations summit in Indonesia's capital Jakarta.
Indonesian brokered a meeting between Mr Kasit and his Cambodian counterpart, Hor Namhong, to negotiate the deployment of Indonesian observers as part of a solution to the ongoing border dispute.
Mr Kasit says he agreed to accept the ''packaged solution'' offered by Indonesia on the condition of a Cambodian withdrawal.
The border dispute between the two members of ASEAN has erupted into clashes several times since 2008, with the latest round just last month.
Posted by CAAI News Media at 3:35 pm