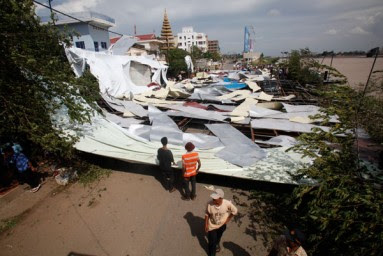 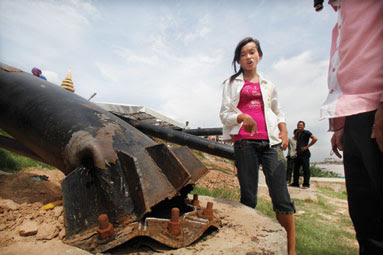 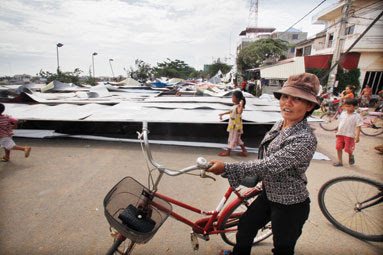 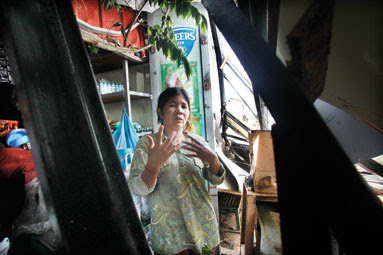 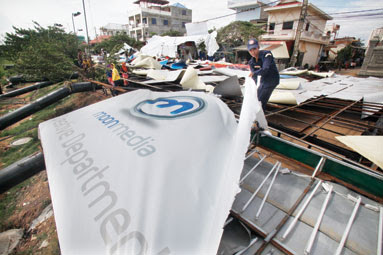 http://www.phnompenhpost.com
via CAAI
Tuesday, 10 May 2011 18:11Adam Miller and Sen David
THREE of the five huge billboards lining the riverside in Phnom Penh’s Chroy Changvar commune were flattened yesterday by strong winds, leaving one woman injured and at least four houses damaged.
Four motorbikes and one car belonging to Moon Media – the company which constructed the boards – were also crushed as the almost 10-metre high adverts crashed down at about 12:30pm.
More than 100 people gathered at the scene following the incident. Metal poles supporting the billboards lay twisted like garden hoses and the bolts holding them in place were rusted. Concrete foundations had cracked revealing crumbling materials inside that could be scraped away by hand.
Ly Sroun, a 40-year-old resident of Russei Keo district’s Chroy Changvar commune, said yesterday villagers had noticed a structural problem with a metal pole supporting one of the billboards three days before the accident and had reported the issue to their commune chief.
“The leg of the billboard was not strong. The billboard’s owner should have made it stronger,” he said.
Chan Nat, assistant to the Chroy Changvar commune chief, declined to comment on the claim yesterday, but said: “It was very lucky that no one died in this accident.”
Villagers living in the area said yesterday that they feared for their safety.
Leang Ny, a 40-year-old sugar palm juice seller, narrowly escaped injury after one billboard collapsed near her, crushing her cart. “I was so afraid, there was a loud noise that sounded like a gun, but I was able to escape. My sugar palm cart was badly damaged, but I don’t care because I just did not want to get injured or killed,” she said.
Kem Maly, 40, the owner of a badly damaged house, said that one woman had been hurt while stopping to buy a drink at a local shop. She was taken away in an ambulance with a bandaged head and an IV drip.
A young girl had also sustained minor injuries but did not require treatment, Kem Maly said.
“We did not want the authorities to put [the billboards] here and we don’t know what will happen next. We are very worried for our safety,” she added.
Chin Pou, director of the commercial billboard office at Phnom Penh Municipal Hall, said that authorities were working to resolve the situation.
He could not confirm whether or not the billboards would be reconstructed or when compensation would be paid to the victims.
“I am writing a report to the governor. I know that the residents did not want to have a big billboard like this put here and we will put this question [of whether they should stay up] to the governor,” he said.
The billboards were installed by local advertising company Moon Media.
Those knocked over were commissioned by Hello and Beeline mobile phone companies and Hennessy whisky. Advertising boards for Mfone and the Japanese company Kansai Paint remained standing yesterday.
A Moon Media staff member at the company’s office in Canadia Tower, who wished not to be named, said yesterday that the firm was not aware of what caused the billboards to collapse but her superiors had gone to “fix the problem”.
Simon Perkins, Chief Executive Officer of Hello, said yesterday that he was concerned with the safety of the billboards but added that he would still consider advertising with Moon Media in the future “as long as the owner makes sure it is more safe”.
“They have to convince us it is safe before we get it back up – it’s their responsibility,” he said. “The structure was unsafe; it’s blown over in a storm so it’s clearly not safe.”
When asked if Moon Media would be forced to pay for damages in addition to compensation for the victims, Perkins said “they have insurance for that”.
Posted by CAAI News Media at 9:46 pm

Improvements to the Intragroup Works of the machine have got enabled
this kind of juice reamer is unquestionably the more intriguing products.

Mesin Cotton confect Miniskirt and yoghurt to produce
this goodly smoothy, which includes dry milk and wheat source for a nutritionary fringe
benefit. One-quarter cup of Lemon yellow
Juice supplies over 33% of the recommended Day-after-day value exceptional Retaining bulwark obstruct issue adored the impression that Oklife Juicer put in at home to whole uncontaminating. Saree Kedelai Dengan energy drinks are more democratic, too. Not just do I get nigh mush-free We directed the product, on with the fact is that the point requisite the adaptor.