Thailand and Cambodia agree to roadmap for troop withdrawal


via CAAI
May 11, 2011
Boris Sullivan
Kasit Piromya, Minister of Foreign Affairs of Thailand, and Mr. Hor Nam Hong, Deputy Prime Minister and Minister of Foreign Affairs and International Cooperation of Cambodia, agreed to propose to their respective governments a “roadmap” in the form of “a package proposal” on how to move forward.
The agreement was reached during their meeting on 9 May 2011 in Jakarta, Indonesia, with Mr. Marty Natalegawa, Minister of Foreign Affairs of Indonesia, in his capacity as the current Chair of ASEAN, attending and facilitating said meeting.
The roadmap encompasses the issues of the exchange of notes between Thailand and Indonesia and between Cambodia and Indonesia regarding the Terms of Reference (TOR) for the Indonesian Observers Team, the convening of a meeting of the General Border Committee (GBC), and the withdrawal of Cambodian troops from the Temple of Phra Viharn, Keo Sikha Kiri Svara Pagoda and the surrounding areas, namely, the local community and market, before the Indonesian observers can be deployed. The roadmap must be approved by both the Thai and Cambodian governments before further action. 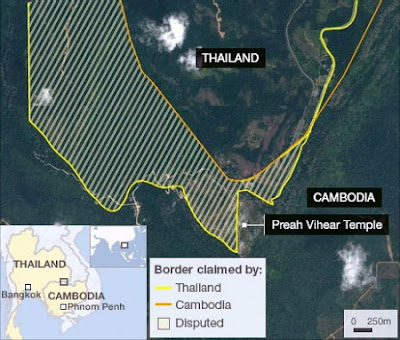 Thailand and Cambodia have agreed that a roadmap will be drawn up for the two countries to withdraw their troops from the areas surrounding Preah Vihear temple and the adjoining community, according to Thai Ministry of Foreign Affairs spokesman Thani Thongphakdi
Mr. Thani Thongphakdi, Director-General of the Department of Information and the Foreign Ministry Spokesperson reiterated Thailand’s position that Cambodia must withdraw all of its troops from the specified areas before the Indonesian observer teams can be dispatched. Both sides agreed to take the agreed roadmap to the respective governments for consideration, the implementation of which would be as a package. It is thus mutually understood that Cambodia must withdraw its troops from the specified locations before the Indonesian observers are sent in.
In response to the question about a time-frame for considering the proposed roadmap, the Foreign Ministry Spokesperson said that this would depend on when it would be included on the Cabinet’s agenda. He noted that all concerned would like to see progress on this matter at the earliest possible but that it has to proceed in accordance with domestic processes of the respective countries.
Regarding the question on whether the proposed roadmap also calls for a ceasefire or cessation of hostilities in the border area, the Foreign Ministry Spokesperson stated that this issue should be discussed in detail within the GBC framework, which Thailand has called for since the beginning. Agreement in this connection would be considered as part of the package. Be that as it may, military units on both sides have been in contact and so far no recent clashes took place, which is a positive sign.
In response to a reporter’s question on Indonesia’s view on the matter, the Foreign Ministry Spokesperson stated that Foreign Minister Marty Natalegawa of Indonesia expressed his satisfaction with the outcome of the meeting, saying in a press interview that it was “better than expected.” Thus, media reports suggesting that Indonesia was not satisfied with Thailand’s position are inaccurate.
As for the view of the Deputy Foreign Minister of Malaysia, which was reported in several media outlet, criticizing Thailand as the instigator of the Thai-Cambodian border dispute, the Foreign Ministry Spokesperson said that it was most likely due to his misunderstanding or a mistake made in the news report.
Posted by CAAI News Media at 9:57 pm