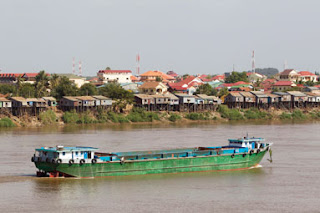 
via CAAI
Wednesday, 11 May 2011 15:00SOEUN SAY/ BLOOMBERG
A CARGO ship nears Phnom Penh Autonomous Port. Shipments through the port increased 34 percent during the first four months compared to the same period last year, according to figures provided by the port. Some 21,665 twenty-foot equivalent units were transported to the port, 5,541 more than the first four months of 2010, between January and April this year. Port Director General Hei Bavy said the increase was due to a rise in both the import and export of agricultural products, textiles and raw material for the garment sector. 'In these months, we noticed that agricultural products are the main factor for the increase in shipments to the port, compared to last year,' he said. 'I hope the figure doubles this year.' So Nguon, president of So Nguon Group, said his firm was seeing growth in garments and agricultural products.
Posted by CAAI News Media at 9:04 pm