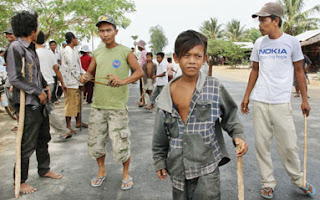 Villagers armed with clubs and slingshots await the return of police after clashes over land in Kampong Speu province’s Oudong district on March 18, 2010. The government and rights groups met to discuss land rights yesterday. Photo by: Sovan Philong
http://www.phnompenhpost.com
via CAAI
Wednesday, 11 May 2011 15:01May Titthara and David Boyle
ANTICORRUPTION Unit head Om Yentieng has agreed to jointly investigate land disputes across Cambodia with outspoken local rights group Adhoc.
Speaking at a two-day land rights conference held at the Cambodiana hotel in Phnom Penh, Om Yentieng said he had agreed to the move following a proposal from Adhoc President Thorn Saray.
“It doesn’t mean that we must speak a common language when working together, but a working group will go to see the problems and make individual judgments through respective reports,” he said on the sidelines of the conference.
He said the investigation, which he would carry out in his capacity as Cambodian Human Rights Commission president, would commence as soon as Adhoc was ready. Thun Saray yesterday welcomed the chance to cooperate with the government though he stressed Adhoc and CHRC had made different findings when previously investigating land conflicts.
“Cooperation is good. We’ll work together to find the facts and if the project goes smoothly, it will benefit the people. Working together does not mean that we have no right to speak [out]. We will still talk,” he said.
Despite the spirit of unity between the rights group Adhoc and the government, Om Yentieng also took several swipes at other right groups attending the workshop. The event was co-hosted by the European Union and four other human rights bodies including the CHRC.
He repeatedly questioned their capacity to impartially assess land disputes and at one point suggested Adhoc employees enjoyed luxury accommodation during field trips.
“Anyone can be a lawyer but don’t try and be a judge,” he warned. “They cannot judge arbitrarily by closing their eyes. There are also many powerful people who have lost the court cases as well.”
He claimed that government-granted economic land concessions were not the source of disputes, as each claim was carefully evaluated and in some cases concessions were revoked.
“The Royal Government pays attention to this issue and is not rigid but is flexible, unlike some people have claimed. More and more land concessions that are being granted are not the sources of land disputes,” he said.
Chargé d’affaires of the EU delegation, Rafael Dochao Moreno, said the workshop was intended to foster an open dialogue between the government and rights groups and help build mechanisms to resolve land disputes.
“We share the same concerns, everybody now knows that land issues are a question of concern and are something that should be addressed immediately,” he said.
He declined to comment on any specific land disputes, but generally condemned the use of force to evict people.
Ny Chakrya, head of the land rights section at Adhoc, told the workshop that of the 184 firms granted economic land concessions since 2010, only 58 had begun developing their plots.
“There are some ambiguities here in getting land concessions because 14 firms have no contract with the Ministry of Agriculture,” he claimed, adding that 85 firms had their licences revoked since last year because of inactivity.
Posted by CAAI News Media at 9:33 pm