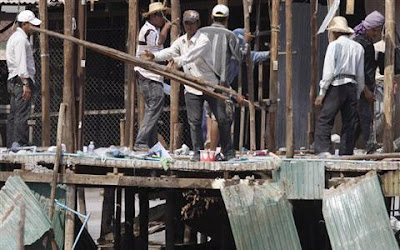 Photo: AP
Phnom Penh city workers demolish wooden houses in Boeung Kak lake as a man in the water collects his belongings in Phnom Penh, Cambodia, Jan. 14, 2011.
“We want to provide the authorities our findings, testimony and recommendations for solving land disputes.”
The government’s human rights committee and Adhoc, a local rights NGO, have agreed to establish a joint working group for investigating land disputes, which have become an increasingly thorny problem nationwide.
Om Yentieng, head of the government’s Human Rights Committee, said the working group will investigate land disputes together and issue a joint report, even if both sides are not in total agreement.
“It does not mean that the working group must have only one voice in a joint report, but that the working group works on the same case,” he said, opening a land dispute workshop in Phnom Penh Tuesday.
Om Yentieng, who is also a senior adviser to Prime Minister Hun Sen and the head of the Anti-Corruption Unit, said the working group made for a “concrete step” in addressing the problem of land disputes, where the rural poor are often ousted from their land by powerful business interests.
Findings by the working group would be put forward to the National Authority for Land Dispute Resolution, members of the government and the courts, he said. “But we do not need others to respect our decisions, because our recommendations or points of view are not a verdict. Our decisions are a light.”
Thun Saray, president of Adhoc, which has a vast network of rights workers across the country, told reporters Tuesday that a joint working group would be more productive than to have his group and the government at odds with each other.
“We want to provide the authorities our findings, testimony and recommendations for solving land disputes,” he said, adding that the courts or national land resolution committee would ultimately be responsible for solving any one issue.
Adhoc received more than 200 land dispute cases in 2010, accounting for more than 300 victims.
“We’ll work jointly to find the facts,” he said. “We’ll help to solve some complicated cases. It is good. This cooperation will not silence us from speaking out.”
Yem Ponhearith, lawmaker for the Human Rights Party, called the working group a good step toward resolving land disputes, but its success would depend on both sides’ gathering of the facts.
Posted by CAAI News Media at 8:28 am