For Khmer Rouge guard, it was kill or be killed 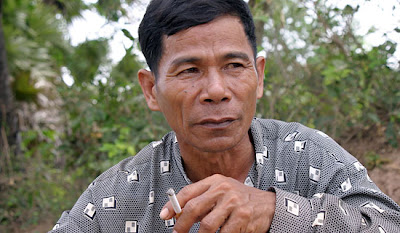 Him Huy, a former guard at the Khmer Rouge prison Tuol Sleng, in Anlong San, Cambodia, on Tuesday, participated in thousands of executions from 1975 to 1979. (Seth Mydans/International Herald Tribune)

"We were victims, too," said Him Huy, the head of the guard detail at the Tuol Sleng torture house, who took part in the executions of thousands of people at a Khmer Rouge killing field.

As the prisoners knelt at the edges of mass graves, with their hands tied behind them, executioners swung iron bars at the backs of their heads - two times, if necessary - before they toppled forward into the pits.

In the severe and paranoid world of the Khmer Rouge prison, guards and torturers themselves worked under threat of death, and Him Huy saw a number of his colleagues kneel at the edges of their graves for that blow to the back of the neck.

"I used an iron bar about that long," he said, spreading his hands wide as he sat in a dry rice field to tell his story late last month, "and about as thick as my big toe."

Him Huy, guard and executioner at the most prominent Cambodian torture house, personifies the horror of the Khmer Rouge years, from 1975 to 1979, when at least 1.7 million people died of starvation and overwork as well as torture and execution.

As the trials of five senior Khmer Rouge figures get under way in Phnom Penh, they raise questions about the guilt - or victimhood - of lower-ranking cadre, the people who carried out the arrests, killings and torture, and who are unlikely to face trial.

Late at night, sometimes two or three times a week, Him Huy said, he drove trucks full of prisoners to the Choeung Ek killing field, where he logged them in - 20 or 30 or 80 at a time - and then confirmed that they had been killed.

He asserted that he had personally killed only five people, as demonstrations of loyalty to his superiors.

At least 14,000 people were arrested and interrogated at Tuol Sleng prison, which was known officially as S-21 and is now maintained as a museum. Only a handful survived.

Him Huy is back home now in this village 80 kilometers, or 50 miles, south of Phnom Penh - a farmer and father of nine, optimistic, hard-working and quick to smile, seemingly comfortable to be who he is and at ease with his memories. His neighbors seem to like him.

"Even the young people, when they have a party they always invite him," said his wife, Put Peng Aun. "If there's a party, he's got to be there."

Asked to describe himself, Him Huy said, "I'm not a bad person. I'm a good man. I never argue with anyone. I never fight with anyone. I have good intentions as a human being."

But some of those who knew him at the prison remember him harshly. One survivor, Bou Meng, says Him Huy beat and tortured him, poking at his wounds with a stick. "His face was so mean," he told interviewers at the Documentation Center of Cambodia, a private research center. "Today he looks gentle."

Two of Him Huy's co-workers at Tuol Sleng, quoted by the historian David Chandler in his book on the prison, "Voices from S-21," remembered him as "a seasoned killer, an important figure at the prison and a key participant in the execution process."

One prison document that bears his signature, from July 23, 1977, reports the execution of 18 prisoners. Scribbled at the bottom is a note reading: "Also killed 160 children today for a total of 178 enemies killed."

Him Huy is evasive about the extent of his duties at the prison. But whatever he did there, he said, he performed on pain of death.

"I am a victim of the Khmer Rouge," he said without hesitation.

"I did not volunteer to work at S-21." "We were all prisoners, those who killed and those who were killed," he said. "And in fact, for a lot of the staff there, the day came when they were killed, too. In the daytime we'd be eating together, and in the evening some were arrested and killed."

In a book about the prison staff called "Victims and Perpetrators?" the Documentation Center calculates that at least 563 members of the staff of Tuol Sleng - about one-third of the total - were executed while working there.

In a distilled and horrific way, Tuol Sleng was a microcosm of the nation, where half-starved and overworked people lived in constant fear of being arrested and killed, often for reasons they never learned.

The first defendant in the United Nations-backed tribunal is Him Huy's former boss, the commandant of Tuol Sleng prison, a tough, sharp-eyed man named Kaing Guek Eav and generally known as Duch. His trial began two weeks ago.

It was Duch who signed execution orders for both prisoners and errant staff. Indeed, Him Huy rose to become fifth or sixth in the chain of command after his superiors were pulled from their jobs and killed.

"Yes, I did kill people," Him Huy said. "I did transport people to Choeung Ek. I did verify lists of people at Choeung Ek. But Duch ordered me to do all of that."

Many Cambodians appear to accept this common defense among former Khmer Rouge cadre: that they had no choice but to be cruel, fearing for their own lives. It is a defense Duch himself has made in the past.

Visiting the prison recently, Chum Mey, another survivor of Tuol Sleng, described 12 days and nights of torture and terror, but without bitterness toward his abusers.

"My thought is not to put the blame on Him Huy because I don't know what I would have done in his place," he said. "I don't think I would have been able to disobey."

Thirty years have passed since the Khmer Rouge were ousted by a Vietnamese invasion. Him Huy is no different from his neighbors, raising a big family and tending to his beans and corn and rice.

At the end of a long interview, he headed back to his bean field, filling a cannister with pesticide and marching down the rows of long yellow beans, swinging a hose from left to right.

He made sure, he said, to walk with the wind behind him so that none of the pesticide would blow back in his face.
Posted by CAAI News Media at 7:19 am