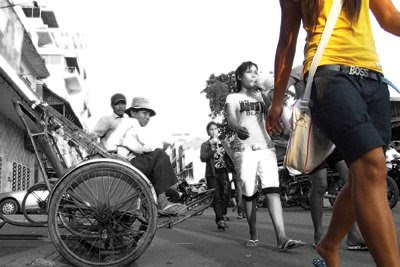 Images from ‘The Boat Goes, The Pontoon Stays’.
by Eric De Vries

SINCE starting the Asia Motion photographers' agency in December last year, Isabelle Lesser has looked to photographers who can tell a story, not just capture one-off images.

Asia Motion is not an image bank, she explains.

"We are concentrating on building stories - quality stories," Lesser said.

She said that while Asia Motion has all kinds of photographers on its books - fashion, advertising, art, social, reportage, even a video artist - what they focus on is bringing Asian stories and features to the rest of the world.

She said because the photographers are working full time they do not have the chance to put together exhibitions, and that this was one of the things the agency can do for them. At Java Cafe and Gallery on Friday, Asia Motion will launch its second exhibition, one that portrays the theme of "change".

The title of the exhibition comes from the Khmer proverb Touk toew, kampong noew, which translates as "The boat goes, the pontoon stays". The photographs in the exhibition, like the proverb, illustrate how some things evolve but others never change.

"Asia is embracing fast and sweeping development," Lesser said. "Asia Motion photographers set out to document the changes and consistencies that Asia is undergoing during these times of change."

She said the photographers were free to explore their own interpretation the theme.

"They have the option to do whatever they want; it is very personal," she said.

Ryan Plummer, a Canadian photographer based in Cambodia, said that the exhibition had given him the chance to both branch out and get back to the roots of his photographic practice, fine art and fashion.

"Mainly in Cambodia I have been shooting editorial work," Plummer said.

"For this project I have been working with transgendered people - not only sex workers - throughout Cambodia. It is a small part of a larger project which will contribute to my body of work."

Plummer said he chose to shoot the project in black and white. "It's an aesthetic choice, a very grainy, very gritty style of imagery," he said.

For French photographer Jeff Perigois, Phnom Penh offers a world of contrasts, which he accentuates using a technique that combines black and white with colour.

His three images from his project "Witness in a World of Waves" contrast Cambodia's traditional mores with its more modern, global trends.

"The young generation would like to have the same things as other people in the world," Perigois said.

"But the pictures also tell stories about the roots in Cambodia."

Lesser, too, looks to the Cambodian roots - quite literally.

Her project "Feeding a Nation" focuses on rice production.
"Rice for me is like the roots of a nation," she said.

"The rice is symbolic. Khmer New Year is at the end of the rice-planting season; it is part of the rhythm of life here."

The exhibition opens at Java Cafe and Gallery tonight from 6-9pm and will also include a video projection from video artist Carlos Franklin..
Posted by CAAI News Media at 9:43 pm

Sorry guy but the picture is from French Photographer "Jean-Francois Perigois"... thanks !