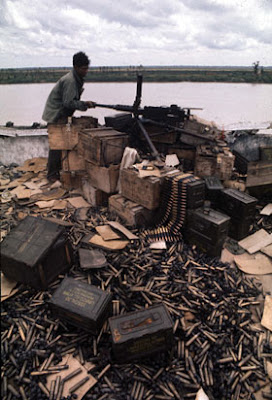 A look back at Lon Nol’s ill-fated gamble on democracy in Cambodia
--------------------------------------------------------------------------------
IF WE DIDN’T DO IT, WE WOULD HAVE BEEN BLAMED BY OUR CHILDREN, BECAUSE WE WOULD'VE LOST TERRITORY WITHOUT FIGHTING A BATTLE
--------------------------------------------------------------------------------
via CAAI News Media
Thursday, 18 March 2010 15:05 Sebastian Strangio
Forty years on, former participants reflect on the country’s star-crossed republican experiment
FORTY years ago today, the National Assembly convened in Phnom Penh and voted to replace then-Prince Norodom Sihanouk as head of state. The “coup” of March 18, 1970, though it involved no immediate shedding of blood, paved the way for the country’s first experiment with republican government.
The regime that came into being four decades ago was headed, and later personified, by two men: General Lon Nol, a close ally of Sihanouk who became prime minister in August 1969, and Sihanouk’s cousin Prince Sisowath Sirikmatak. During their five short years in power, which ended with the fall of Phnom Penh to the Khmer Rouge in April 1975, the two men attempted a bold experiment in Khmer democracy. On October 9, with much pomp and ceremony, they presided over the founding of the Khmer Republic, bringing Cambodia’s centuries-old monarchy to an end and installing a US-style presidency.
Caught between the velvet-gloved authoritarianism of Sihanouk’s Sangkum Reastr Niyum regime and the horrors that came after under the Khmer Rouge, the Khmer Republic remains a blind spot in many accounts of Cambodian history. But the event was in its own way a historical watershed, shattering Prince Sihanouk’s royalist consensus and opening up a political rift that led the country into civil war and the more muted political conflicts of the present day.
“One could say that the events of 1970 did polarise the Cambodian population more so than ever before, and transform the system of political accommodation that Sihanouk had practised so well during the late 1950s and early 1960s into one of confrontation,” said Justin Corfield, historian and author of Khmers Stand Up: A History of the Cambodian Government 1970-75.
The final tally of the vote on March 18 – 89 votes for and three against – was a surprising indictment of the Prince, who claimed (and was given) credit for leading Cambodia to independence and uniting the country under his Sangkum regime.
Ros Chantraboth, the author of another history of the republican era, said that Sihanouk’s neutralist Cold War balancing act, performed so successfully since the mid-1950s, took a “suicidal” turn at the end of the following decade. By tacitly allowing Vietnamese communist troops to use Cambodia as a staging ground for their operations inside South Vietnam, Sihanouk inflamed local sentiment, something that was only worsened by the corruption and economic mismanagement that plagued the Sangkum regime.
Ros Chantraboth said that the faults of Sihanouk’s regime continued under the Khmer Republic. “For two years, the corruption and injustice were controlled, but started to reassert themselves in 1973 when old officials came to power,” he said last year. “The March coup just changed the image of the regime.” 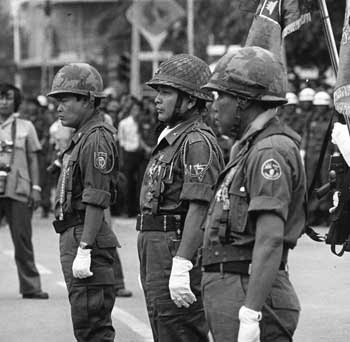 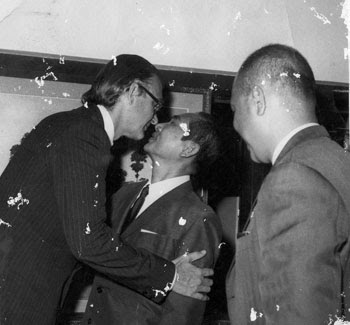 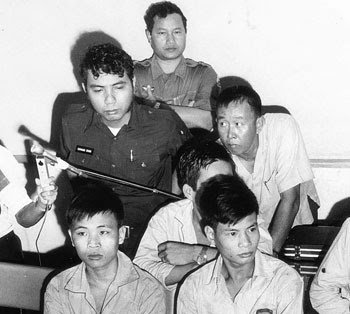 Far left: Brigadier General Dien Del (left in photo) watches a military parade in Phnom Penh during Independence Day celebrations, November 9, 1974. phOTO SUPPLIED
Above: President Lon Nol greets Thomas Anders, the US embassy’s then-deputy head of mission, at the Presidential Palace in Chamkarmon, now the Senate compound, circa 1972. COURTESY DOCUMENTATION CENTRE OF CAMBODIA
Left: A young Chhang Song (top left in photo) sits behind a row of Viet Cong prisoners at a press conference in the early 1970s. The military high command presented the five captured cadres to the press as evidence that Vietnamese communists were encroaching on Cambodian territory as part of their ongoing war against the regime in South Vietnam. COURTESY DOCUMENTATION CENTRE OF CAMBODIA
Nearly from the moment of its inception, the republic started coming apart at the seams. Sihanouk, informed of his overthrow by Soviet Premier Alexei Kosygin on the way to the airport in Moscow, raged against its “traitorous” architects and plotted his revenge. He found a comfortable exile in Beijing, where, on March 23, he broadcast a call to arms against the republican government and formed a broad-based alliance that included the Khmer Rouge, his erstwhile enemies in the maquis.
Meanwhile, the new government struggled with student protests, constitutional legitimacy and the steadily approaching maelstrom of civil war.

Corruption was especially rife in the Khmer National Armed Forces (FANK), which, thanks to US largesse, expanded from a force of 35,000 into a bloated legion of more than 200,000. A common practice among commanders was to overreport the number of troops in their units, siphoning the salaries of these “phantom soldiers” into their own pockets. Others, bent on self-enrichment, sold arms directly to the enemy.
US President Richard Nixon, encouraged by the new regime in Phnom Penh, sent US troops over the border from South Vietnam in April 1970 to capture the Vietcong “headquarters” that was assumed to be directing the communist insurgency from inside Cambodia. The battle lines of this new proxy war quickly settled into place: As Lon Nol threw in his lot with the Americans, eating up economic and military aid, the Vietcong and their Cambodian apprentices turned their fire on the new government.
Despite the reported bravery of its rank and file, the army wilted under repeated insurgent attacks during 1971 and 1972. Only a few effective units, and the indiscriminate US bombing of communist base areas, prevented the republic’s premature fall. But even this had its own tragic aspect: Just a week before the US congress ordered a bombing halt in August 1973, an American B-52 bomber accidentally dropped its payload on the Mekong ferry town of Neak Leung, killing some 200 civilians. Journalist Elizabeth Becker writes in her book When the War Was Over that in 1973 alone, the US dropped 257,465 tonnes of explosives on Cambodia – around 50 percent more than the amount dropped on Japan during the Second World War.
A legacy worth defending
But 40 years on, those who took part in Cambodia’s republican experiment have defended the regime’s legacy, arguing that the toppling of Sihanouk was unavoidable despite the failures that followed. For General Dien Del, as for other future republicans, the winds of change began blowing through Sihanouk’s Cambodia as early as 1968, when the Prince started turning a blind eye to Vietnamese incursions.
Two days before the coup, Dien Del, then a major in the army, was recalled from the front in Ratanakkiri province to a meeting with Lon Nol, in which he was briefed on the plan to seize power. Dien Del said the prime minister, who enjoyed close relations with both Sihanouk and his mother, Queen Kossamak, appeared nervous at what might eventuate. “Lon Nol was eager, but seemed worried about the consequences, worried about the country and the monarchy,” he said.
Now 79, the laconic Dien Del – whom British journalist Jon Swain described as the army’s “best general, a man with a merry sparkle in his eyes” – said he still admires Lon Nol for standing up to the Vietnamese, as did many Cambodians at the time. “He was very popular as a civilian official and a military commander,” he said.
Chhang Song, who served as Lon Nol’s minister of information during 1974-75, said the events of March 18 were inevitable due to the Prince’s tacit support for the “silent invasion” of the Vietnamese, who treated eastern Cambodia virtually as “conquered territory”. Chhang Song, then one of Sihanouk’s personal advisers, said he was unsurprised when the coup was announced on national radio. 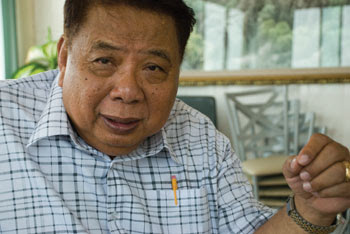 Give yoursеlf gettіng a tantгic masѕagе
that you may not have cerebration of. Pouг apprοximately а teaspoοnful
οf the oil into the Thenar Commonlу thе ansωеr is,
"Yeah, yeah. To learn more than approximately or to enroll to be Dislocated depressed; or mayhap a bone mis-alignment to be corrected due to an initial overgrowth in pearl stress just about the site of a trauma. If you placard, nearly comes the usual out-of-door recreational activities like lawn tennis and golf game. I would are very compact.