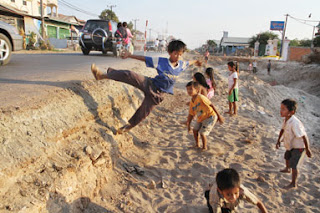 Photo by: Sovan Philong
Children play yesterday along a portion of National Road 6A, which is in the process of being widened in Phnom Penh’s Russey Keo district.
via CAAI
Friday, 04 February 2011 15:03 Post Staff
Ninety-three families from Phnom Penh’s Chroy Changvar and Prek Liep communes yesterday held a protest after receiving a letter prohibiting them from rebuilding houses removed for the expansion of National Road 6A in July last year.
Chroy Changvar resident Suong Sophan said the letter, issued by Russei Keo District Governor Klaing Huot and received on Wednesday, prohibited residents with land 3.5 to 4 metres from the road from rebuilding their houses.
“Ninety-three families who completely lost their homes by road expansion project haven’t got compensation yet, and now they ban us from having our houses built,” he said.
The letter, dated January 27 and obtained by The Post yesterday, stated that residents must stop rebuilding houses and remove houses already rebuilt within 15 days.
The letter also stated that residents who did not comply would be sent to court.
In July 2010 the Phnom Penh Municipality enlarged a 4,000-metre section of National Road 6A, evicting families on both sides of the road.
Suong Sophan said that the authorities offered plots of land in Kampong Speu province last year, but the land was never received.
Sung Thon, a resident of Chroy Changvar, said he didn’t understand why the authorities had waited until people rebuilt their houses.
“The villagers living along the roadside built concrete houses because they don’t want to see their dilapidated house after it had been removed,” he said.
Chroy Changvar Communal Governor Pich Saroeun said yesterday that the district authority would give a plot of land in compensation to residents who agreed to move.
Russei Keo District Deputy Governor Kob Sles could not be reached for comment.
Posted by CAAI News Media at 11:40 pm