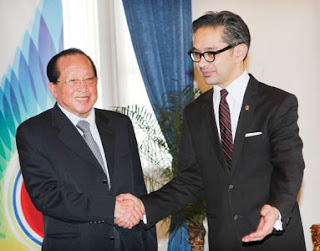 
via CAAI
Tuesday, 10 May 2011 15:02Cheang Sokha and May Titthara
The foreign ministers of Cambodia and Thailand met yesterday afternoon to discuss the terms of reference for the deployment of independent observers to their shared border, as Malaysia reportedly blamed Thailand for the renewed conflict.
Koy Kuong, spokesman for Cambodia’s Ministry of Foreign Affairs, said the meeting between Cambodia’s Hor Namhong and Thai counterpart Kasit Piromya was held in Jakarta yesterday afternoon and mediated by Indonesian foreign minister Marty Natalegawa.
The two sides first agreed in principle to the deployment of Indonesian observers following fighting along the border in February. The arrangement has since been stalled by Thailand, however, which insists that Cambodia withdraw its troops from Preah Vihear temple and the surrounding area before observers are sent to the area.
As The Post went to press, the results of the meeting was not yet known. But before the talks, Thai defence minister Prawit Wongsuwon said he hoped the two sides could finally reach a common ground, according to the Bangkok Post.
Officials from the two countries, however, continued to disagree on key points.
“The prime minister [Abhisit Vejjajiva] has spoken clearly about this and the armed forces are of the same opinion,” Prawit said yesterday. “Cambodian soldiers must withdraw from the disputed area before any other steps can be taken.”
Koy Kuong said yesterday that the troops and people living around the temple of Preah Vihear were residing well within Cambodian territory and would not withdraw.
“A foreign country cannot push the Cambodian people away while they are in their territory,” he said.
The exchange of opinions came as newswire Agence France-Presse reported that Malaysia had blamed Thailand for the renewed clashes that broke out last month along the border near Oddar Meanchey province, saying it had reneged on the observer deal.
“An agreement had been agreed upon, [Thailand] should adhere to it, I wouldn’t want to say lacking in faith ... [but] they did not adhere to the agreement,” Malaysian deputy foreign minister Richard Riot Jaem was quoted as saying.
“All the 10 countries [in ASEAN], I stress, including Thailand and Cambodia, agreed to the [observer] agreement, but sad to say, the agreement was brought back to the respective two countries. Cambodia accepted it, Thailand did not accept,” he added.
Thai Foreign Ministry spokesman Thani Thongphakdi said he could not comment yesterday.
At the border, meanwhile, the Cambodian Mine Action Centre said almost 100 demining experts had been deployed around Banteay Ampil district in Oddar Meanchey province.
CMAC director general Heng Ratana said his organisation was searching for devices left in farm land after “tens of thousands of shells” were fired by Thai troops in the recent fighting, which started on April 22.
He said that demining experts were working closely with village and commune chiefs to educate people about the danger of touching unexploded shells and were also clearing munitions in the area.
Seng Nin, 43, from Banteay Ampil’s Kokmon commune, said yesterday that residents could face starvation due to the shelling of their crops.
“It is growing season and they dare not go to fields as they are afraid of the unexploded shells,” he said.
Posted by CAAI News Media at 12:05 am