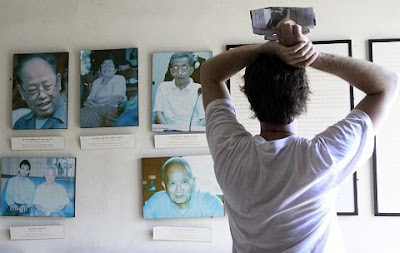 Photo: Reuters
Tourist looks at portraits of former Khmer Rouge leaders Ieng Sary (R), 84, ex-foreign minister, his wife Ieng Thirith, 78, former minister of social welfare (2nd L), former prison chief Kaing Guek Eav (R), better known as Duch, former President Khieu Samphan (bottom R), and Nuon Chea (L), 84, the regime's second in command, at Toul Sleng genocide museum in Phnom Penh.
“I don’t consider that the investigation is concluded and I’ve asked for a number of steps to be taken including the interviewing of the suspects who are named in the introductory submission."
Prosecutors at the Khmer Rouge war crimes tribunal in Phnom Penh are at odds this week after investigating judges said they have completed their work on their third case - reportedly against two senior former military commanders. In Phnom Penh, critics accuse the government of interfering in the high-profile prosecutions.
The war crimes tribunal has long been split over how many former Khmer Rouge cases it should prosecute.
The international prosecutor Andrew Cayley said last year that he expected to see no more than 10 people stand trial for their alleged roles in the deaths of around two million people during the movement’s rule of Cambodia between 1975 and 1979.
But his Cambodian counterpart, Chea Leang, has opposed prosecuting more than five people. The first of those was the former security chief Comrade Duch, whom the court last year convicted of war crimes and crimes against humanity. His sentence is under appeal.
The other four, who make up Case Two, are the movement’s last surviving senior leaders. Their trial is expected to start later this year.
But while those cases are moving forward, the Cambodian government has long opposed prosecuting Cases Three and Four - involving the five remaining suspects.
The prosecution is tasked with assessing the court’s investigation and determining whether or not there is enough evidence to proceed to trial.
This week international prosecutor Andrew Cayley said it is clear that much more work is needed on Case Three.
“If you’re asking me how much more investigation needs to be done, I would simply use the words 'a significant amount' of investigation is still left to be done in that case,” Cayley said.
Cambodia remains an authoritarian country and the government’s opposition to Cases Three and Four has had a chilling effect on the tribunal’s Cambodian staff, most of whom have refused to work on the cases.
This week the investigating judges in Case Three closed their investigation and handed the case file back to the prosecution.
“I don’t consider that the investigation is concluded and I’ve asked for a number of steps to be taken including the interviewing of the suspects who are named in the introductory submission," Andrew Cayley said as he explained what work is still needed, "and a number of other steps including investigation of crime sites also originally named by the prosecution in the introductory submission, which haven’t been investigated at all.”
Cayley’s comments appear to confirm widespread rumors that the investigating judges did very little work on Case Three.
But Cayley’s Cambodian counterpart, Chea Leang, later released a press statement recommending that Case Three be closed.
Chea Leang said she had examined the case file, and decided that the unnamed suspects were not senior leaders and were not among those most responsible for crimes committed by the Khmer Rouge - the two categories that define those whom the court can prosecute.
With the Cambodian prosecutor, the government and the investigating judges all pushing to close Case Three, outside observers doubt that the prosecution will go forward.
International prosecutor Andrew Cayley’s last option for Case Three is to appeal its closure to a bench of five judges. Three of the judges are Cambodian and trial observers believe the bench would likely vote to dismiss the case.
Posted by CAAI News Media at 7:46 am

Hey, I think your site might be having browser compatibility issues.
When I look at

your blog in Ie, it looks fine but when opening in Internet Explorer, it

has some overlapping. I just wanted to give you a quick heads
up! Other then that, very good blog!