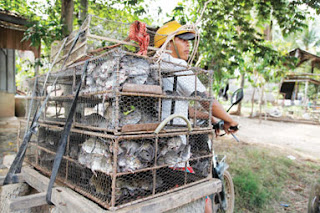 Hourt Vy, 40, transports a load of field rats from Kandal province to the Cambodia-Vietnam border earlier this week. Photo by: Heng Chivoan
http://www.phnompenhpost.com/


via CAAI
Tuesday, 10 May 2011 15:00Sieam Bunthy
VIETNAMESE demand for field rat meat is boosting some Cambodians’ income, local traders say.
Traders in Kandal province claimed the Vietnamese consider rat meat an affordable delicacy, and said it generated a modest wage that often served as a secondary source of income.
“Rats in Vietnam are used for food, and sometimes to make pâté meat,” said Hourt Vy, who for 10 years has been buying rats in Kandal and selling them in the Kingdom’s eastern neighbour.
He claimed rat meat was well regarded in parts of Vietnam, and enjoyed on the level of pork and beef.
Hourt Vy said he can collect as much as 150 kilogrammes a day, buying them for 3,500 riel per kilogramme and selling them across the border for 4,000 riel per kilogramme.
“People without a job can do this to make money to support their families. And some do it to add to money they’re already making at their regular job,” he said, adding that rat traders can turn profits up to 15,000 riel per day.
Sang Yung, a buyer in Kandal province’s Koh Thom district, said he has exported rats from Kandal, Kampong Cham and Kampong Thom provinces to Vietnam. His Vietnamese customers pay 4,200 riel per kilogramme, giving him a profit of 200 riel per kilogramme.
“Vietnam indeed needs more rats because they use it for food. And dead rats are used to feed fish and crocodiles,” he said.
Sang Yung added that rat trading is currently a popular profession as demand from Vietnam is high.
In Khun, district governor in Koh Thom said that rat trading serves a dual purpose for people in his area.
“Most are farmers growing dry-season rice who capture the rats to keep them from eating the rice, but they can make additional money by selling the rats as well,” said In Khun.
The Cambodian government does not charge a tax on rat exports because they damage crops here, some rat traders said.
The Vietnamese government has created a policy that calls on the country’s population to catch rats for the same reason, In Khun said.
Officials at Chrey Thom gate, a border crossing through which many rat traders operate, could not be reached for comment.
Vietnamese Commercial Counsellor Le Bien Cuong, who is based in Phnom Penh, said that he did not have any information about the export of rats to Vietnam from Cambodia.
ADDITIONAL REPORTING BY PRAK SAY
Posted by CAAI News Media at 11:44 pm