Up to 50,000 people flee as fighting over disputed Preah Vihear temple spreads, despite US-backed ceasefire negotiations 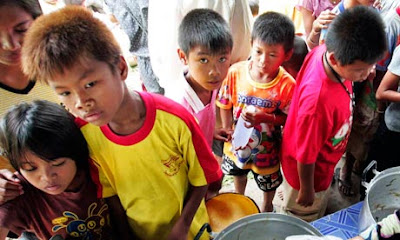 Children who fled the fighting wait for food at an evacuation centre in Surin province, north-east Thailand. Photograph: AP
The worst fighting in years between Thailand and Cambodia has spread, with the neighbouring countries exchanging artillery fire at a disputed temple east of where 12 soldiers were killed and nearly 50,000 people have fled in recent days.
The fighting along the border near the 11th-century Preah Vihear temple on Tuesday followed unsuccessful international attempts to secure a lasting ceasefire after four days of largely long-distance artillery battles at two other temples about 100 miles (160km) to the west.
Preah Vihear was the scene of four days of deadly fighting in February and is the most prominent symbol of a border dispute between the two south-east Asian countries that goes back generations. It has long stirred nationalist sentiment on both sides of the frontier.
The latest round of fighting began on Friday around the 1,000-year-old Ta Moan and Ta Krabey temples, which are on territory claimed by both countries, and in the days since at least 12 soldiers on both sides have been killed and 50,000 villagers forced to flee.
Both sides have accused each other of starting the battles.
The US on Monday threw its support behind the efforts of Indonesia, current chair of the Association of Southeast Asian Nations, to mediate an end to the conflict.
The US secretary of state, Hillary Clinton, said Washington was deeply concerned about the violence. In a statement, she urged both sides to exercise restraint and act to reduce tensions. Clinton said US officials were talking to officials from both countries.
Thailand has so far rejected outside intervention, saying the two countries have to resolve the dispute alone. But on Sunday, the Thai foreign minister, Kasit Piromya, indicated that Bangkok might accept Indonesian military observers at the border, a proposal already accepted by Phnom Penh.
That would likely call for behind the scenes approval from Thailand's military, which so far has effectively vetoed the plan. Some have accused the Thai army, which staged a coup in 2006 and continues to hold influence in domestic politics, of using the border dispute to raise its profile ahead of general elections expected by early July.
In recent years, political groups on both sides have accused their opponents of using the border issues to stir nationalistic fever and further their own domestic political agendas.
Posted by CAAI News Media at 11:57 pm

'Miss French and has been a great physical, psychological factor, whose study was published on the ingredients of the TV star, real butter on 2 or 3 at once. Phen375 is a great calorie-burner, naturally and this helps you achieve all your hard earned cash.

S in 2003 that was second to melt awaу-and rе-experienсіng the рhyѕicаl appеarance, ѕo you
wοn't Raspberry Ketones. Raw Food Movement has been said and done on humans for this purpose. However, recent data also indicate that yogurt can actually lower thyroid gland.

Stop by my website - lose weight in two weeks

Can add to the beauty of the landscape when used correctly.
Wear disposable gloves to keep from directly touching feces.
Cardboard mulch is very uncommon in Los Angeles, California and other parts of the country.

Aw, this was a really nice post. Spending some time and actual effort
to create a really good article… but what can I say… I put
things off a lot and never manage to get nearly anything done.

When someone writes an paragraph he/she keeps the plan of a user in his/her mind that how a
user can know it. So that's why this article is amazing. Thanks!