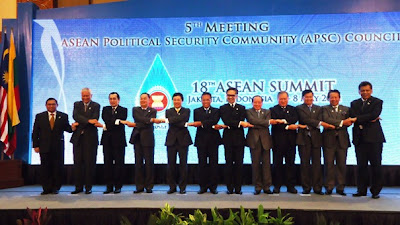 AKP Jakarta, May 5, 2011—In the afternoon of Friday, ASEAN member countries met in their 5th ASEAN Political Security Community Council here, the capital of Indonesia, chaired by H.E Dr. Marty Natalegawa, Foreign Minister of Indonesia.
In addition to the host country, the head delegates to the function were foreign ministers from Cambodia, Brunei, Laos, Myanmar, Malaysia, Philippines, Singapore, Thailand and Vietnmam.
by Kimseng
______
DPM Sok An Leaves for Kuala Lumpur
AKP Phnom Penh, May 6, 2011 – Deputy Prime Minister H.E. Sok An left here yesterday for Kuala Lumpur, Malaysia to attend the ICAPP Conference on Natural Disasters and Environmental Protection, taking place from May 5 to 7.
H.E. Sok An, also Minister in charge of the Office of the Council of Ministers, was accompanied by H.E. Yos Son, Chairman of the Commission for International Affairs of the Cambodian People’s Party (CPP) and other high-ranking officials.
The Cambodian delegation is scheduled to return home on May 8.
By SOKMOM Nimul
______
﻿DPM Sar Kheng: NGO Law Is Not Unconstitutional
AKP Phnom Penh, May 6, 2011 – Deputy Prime Minister and Interior Minister H.E. Sar Kheng has reacted against some NGOs’ criticism over the draft NGO law, which, they said, is unconstitutional and restricts the rights of civil society.
“The royal government has no intention to threaten or restrict the rights of associations and NGOs, but the NGO law will help them instead,” explained H.E. Sar Kheng at a graduation ceremony held here on May 5 at Chaktomuk Conference Hall.
“During the drafting, we have studied and done research on association and NGO laws of different countries in the region and the world. [...] We have held a seminar to discuss the draft law with the participation of all stakeholders including NGOs and associations,” he said.
Foreign ambassadors accredited to Cambodia and visiting delegations of the European Union and the U.S. State Department also expressed their support to this draft NGO law.
According to the Cambodian deputy prime minister, some 3,000 NGOs and associations have been now operating in Cambodia.
By KHAN Sophirom
Posted by CAAI News Media at 10:04 pm