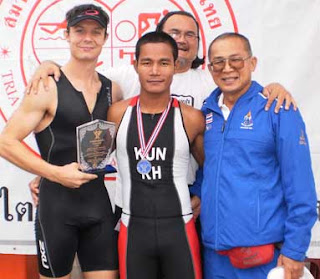 
via CAAI
Friday, 06 May 2011 15:00 H S Manjunath
The newly formed Cambodian Triathlon Federation is staging its inaugural Aquathlon competition involving a 700-metre swim and a 5-kilometre run at the National Sports Complex this Sunday, with the first race beginning at 8:30am. The contest in the Children’s category for boys and girls aged 10-15 years will feature a 250-metre swim followed by a 2.5-kilometre run.
Participants will first take a plunge for the swimming leg at the Olympic Stadium pool and then break into their run around the sprawling sports grounds.
National Triathlon coach Rowdie Loughlin revealed that, despite a lack of official funding, the federation had sent its first Cambodian triathlete, Narak Kun, to an international race in Thailand’s Chaiangsaen province last month.
“[Sunday’s] event will see Cambodians competing with expats. We already have over 30 entries including 10 members of the national team and in all we expect about 100 participants on the race day,” Loughlin told the Post on Wednesday.
“We hope that the race will uncover Cambodian talent for endurance sports. The race will be modified and promoted among the wider population to attract talented youngsters from all backgrounds.
“We have pulled together a great mix of national swimmers including two Olympians, a national athlete, national triathlete and several expatriate triathletes along with lesser trained but determined members of the Phnom Penh community,” he added.
Registration for the race is open until today with a fee of US$10 for foreign nationals and $5 for foreign children, while Cambodian adults pay 2,000 riels (US$0.49) and children 1,000 riels. Further details can be obtained from Rowdie Loughlin on 077359828.
Posted by CAAI News Media at 10:32 pm

Well, our club athlete Chamraen Youri took silver medal at that competition and later, one silver more and in 3rd such meet in 2012 he took a gold medal as well. Even, he never trained as triathlete.
"National Triathlon coach Rowdie Loughlin" who was that time teacher of one international school in Phnom Penh honestly confessed to us, that he never used to be a triathlete coach or an triathlete in any internationally recognized club, that Cambodian National Team actually not exist, no any training provided, no training program etc. Soon, after this competition, he just vanished, and nobody saw him again... Cheers!

Amazing! Its truly remarkable post, I have got
much clear idea about from this article.