Pepper and salt: It must be Kampot 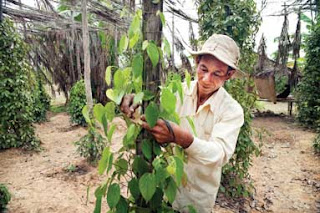 
via CAAI
Friday, 06 May 2011 15:01 Mark Bibby Jackson
Pepper might be big business in Kampot, but it is not as big as it used to be. “When I was young there were pepper trees everywhere,” says Ngoun Lay, 60, president of the Kampot Pepper Association.
“In the past, pepper growers were very rich men,” he added. “In the 1950s and ’60s, 8,000 tonnes of Cambodian pepper were exported to international markets each year. At that time we had 3 million pepper trees.”
This number dwindled during the Khmer Rouge regime as priority was given to rice production.
“Pepper trees start to die if you don’t take care of them for two to three months,” says Ngoun Lay.
Despite coming from four generations of pepper farmers, Ngoun Lay grew a few pepper trees for his family during the barbaric regime.
Founded in 2008, the Kampot Pepper Association represents 143 pepper producers in Kampot and Kep, the vast majority of which are family producers like Ngoun Lay. There are also 40 farmers growing pepper who are not members, because they do not meet the association’s minimum criteria of having 100 pepper trees.
According to Ngoun Lay, the province has a long history of pepper plantation dating back to the 13th century.
“The soil here is different from other places,” he says. “We have red soil and soil with sand, so during the rainy season it is easy for the water to flow fast and in the dry season the earth is still wet under the surface. That’s why the pepper here is so good.”
It is also 100 percent organic. “If they use chemicals, we do not let them join our association,” he says.
This year promises to be a good one for pepper farmers. Whereas only 10 tonnes of pepper was produced in 2009-10, Ngoun Lay anticipates 15 to 16 tonnes this year. And next year he hopes for 20 tonnes.
In part this is due to an increase in the number of mature trees. In 2009 there were only 19,000 mature trees, now there are 27,000.
Another factor is that this year’s crop promises to be good, at least judging by Ngoun Lay’s own plantation. “There are more fruit this year,” he says. “So I hope to have a bumper year.”
Ngoun Lay attributes the growth of Kampot Pepper to the passing of a law on Geographical Indications in 2008. Before, anyone could call their pepper Kampot, thus damaging the quality and reputation of the product.
Quality is something the Kampot Pepper Association places great importance upon. It employs a team of 12 to travel around various plantations to ensure the quality of the pepper is maintained and that members are meeting the 20 articles of association.
Although some producers who are not part of the association still call their pepper Kampot, at least now the association has a means of recourse.
“Some people are stealing our name to put on their pepper after they have seen that our product is popular,” says Ngoun Lay, who knows of at least three companies that have tried to call their pepper Kampot despite not being part of the association.
“After we inform them, they have to omit the name from their products because our name is registered. If they are not a member of the Kampot Pepper Association they can not use our name.”
Ngoun Lay’s modest aim is to achieve 100 tonnes of pepper production per year. “We hope that Kampot Pepper will become more famous and consumers will buy our pepper because they recognise the quality of our pepper,” he says.
INTERPRETER: RANN REUY
Posted by CAAI News Media at 10:35 pm

Are you in need of a loan? Do you want to pay off your bills? Do you want to be financially stable? All you have to do is to contact us for more information on how to get started and get the loan you desire. This offer is open to all that will be able to repay back in due time. Note-that repayment time frame is negotiable and at interest rate of 3% just email us (creditloan11@gmail.com)