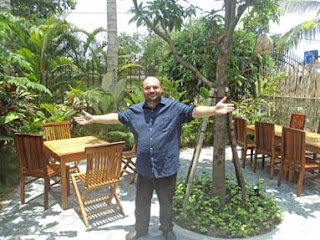 Photo by: Michael Sloan
Johannes Riviere poses in the garden of Cuisine Wat Damnak
http://www.phnompenhpost.com/
via CAAI
Friday, 06 May 2011 15:00 Michael Sloan
Juggling the competing demands of customers, suppliers and staff when starting a new restaurant is stressful enough without adding a two-month-old baby into the mix.
But that’s the situation former Hôtel de la Paix head chef Johannes Riviere and his partner Carole Salmon, a former teacher, find themselves in, following the opening of their new restaurant Cuisine Wat Damnak on April 23.
The new venture features a set menu of traditional Cambodian foods made from locally sourced ingredients and based on recipes Riviere perfected during his time at Hôtel de la Paix and an earlier stint as a cooking instructor at Sala Bai Hotel School.
According to Riviere, Cuisine Wat Damnak is unique in having a menu comprised of several lesser known Cambodian dishes in a restaurant setting.
“My intention was to create a restaurant centred around quality Cambodian food. I insist on the word Cambodian and not Khmer, as Khmer has a strong sense of national identity, and it leaves out Chinese, Cham Muslim and Vietnamese-influenced foods, all of which are represented in the menu.”
Featuring freshly caught fish from Tonlé Sap Lake and locally grown vegetables and meats such as quail, the $15 set menu at Cuisine Wat Damnak is a six-course banquet. It includes an eclectic mix of dishes
ranging from grilled puffer fish to pork shanks served with pumpkin and deep fried shallots.
Riviere’s partner Carole, told 7Days the sheer amount of food served has resulted in several light-hearted complaints from customers.
“They complain a bit about the size of the portions but they all finish their dessert so I think its fine,” she said.
Being able to exercise total control over their restaurant’s menu is one of the factors that led the couple to start planning its opening back in October 2010, according to Riviere.
“In de la Paix it’s difficult because when you work in a hotel you have to please your customer. If your customer shows up and wants to have carbonara pasta and it’s not on the menu you have to have it, and if you show up on Christmas Eve and you want a unique menu, I have to do it for you.
“Here there’s not those demands made – if you don’t like the menu you can go somewhere else” Carole, who met Riviere during a Japanese cooking class he was teaching at Sala Bai, said she cannot remember the exact moment the couple decided to open Cuisine Wat Damnak, but said she suspects the thought of one day opening a “fine dining Cambodian restaurant” had been in the back of Riviere’s mind since 2008 when he published the cookbook Cambodian Cooking, featuring local recipes.
“It was a long process, but the preparation has paid off. By the time we started we knew the right places to buy and the right construction people. Being fluent in Khmer was a big help,” she said.
While the 25-seat restaurant has been full most nights since it opened, Riviere expects a lull in customers during May, which will give the couple time to furnish the upstairs floor of the restaurant to create space for another 20 diners.
“Right now we’re still establishing ourselves. We have an opening menu which offers an occasion for the kitchen to practice and the service to work together. So far our reception has been good and I definitely think there is room for us in Siem Reap,” he said.
Posted by CAAI News Media at 10:12 pm

Good day I am so grateful I found your web site, I really found you by
mistake, while I was researching on Aol for something else,
Regardless I am here now and would just like to say thanks for a tremendous post and a
all round entertaining blog (I also love the theme/design), I don’t have time to look over it all at the moment but I have book-marked it and also
included your RSS feeds, so when I have time I will be back to
read much more, Please do keep up the excellent jo.
my site: garden centre online

Do you mind if I quote a couple of your posts as long as I provide credit and sources back to
your website? My blog is in the very same
niche as yours and my visitors would truly benefit from a lot of the information you
provide here. Please let me know if this okay with you.
Thank you!

my site ... how can i get more followers on instagram

Link exchange is nothing else but it is simply placing the other
person's website link on your page at appropriate place and other person will also do similar in support of you.

It's going to be finish of mine day, but before finish I am reading this great piece of writing to increase my know-how.

My coder is trying to persuade me to move to .net from PHP.

I have always disliked the idea because of the expenses.
But he's tryiong none the less. I've been using Movable-type on a
number of websites for about a year and am worried
about switching to another platform. I have heard very good things about blogengine.
net. Is there a way I can transfer all my wordpress content into it?
Any kind of help would be greatly appreciated!

Hi my family member! I wish to say that this article is awesome,
great written and include almost all important infos.
I'd like to peer more posts like this .

Feel free to visit my page - kitchen in northern virginia