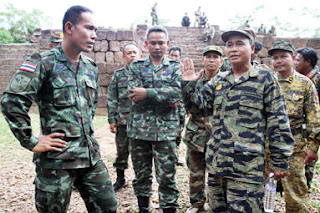 
via CAAI
Friday, 06 May 2011 15:03 Cheang Sokha and May Titthara
Cambodian Foreign Minister Hor Namhong flew to Jakarta yesterday morning with the aim of holding sideline talks with his Thai counterpart at this weekend’s ASEAN summit, following deadly clashes between the two countries.
Speaking to reporters at Phnom Penh International Airport before his departure, Hor Namhong said that the Foreign Minister of Indonesia, Marty Natalegawa, was set to hold separate meetings with Cambodia and Thailand today. A joint meeting, to discuss the provision of unarmed observers at the border, was due to be held at a later point.
Thailand and Cambodia first agreed in principle for neutral observers to be stationed along the border after fighting erupted in February near to Preah Vihear temple.
The terms of reference for their entry, however, have yet to be finalised by Thailand.
“We hope that when the Indonesian observers arrive, we can secure the ceasefire,” Hor Namhong said, adding that he had unofficial information that Thailand had accepted the terms for the observers’ deployment.
Natalegawa, however, said yesterday that he was still “waiting” for a letter from Thailand agreeing to the terms. Cambodia has already provided the observer approval, he added.
The prospect of talks between Cambodian Prime Minister Hun Sen, and Thai premier Abhisit Vejjajiva were also put under the spotlight yesterday.
The Bangkok Post reported yesterday that Abhisit had indicated that he had no intention of participating in talks.
“Don’t forget that I met Hun Sen four times late last year, and then in February, clashes erupted,” Abhisit was quoted as saying. “And I insist that each clash is not an accident. It is an intention to internationalise the issue.”
Thani Thongphakdi, spokesman for the Thai Ministry of Foreign Affairs, said yesterday that Abhisit did not want to meet with Hun Sen at the summit in Jakarta because the atmosphere was “not conducive” to negotiations. Thani stressed that instead of trying to involve other countries in the dispute, Cambodia should negotiate with Thailand bilaterally.
“I think that this issue was brought up by Cambodia, so therefore we feel that this issue should not burden ASEAN,” Thani said. “ASEAN already has a lot on its agenda.”
At the border yesterday, a ceasefire continued to hold after intense fighting that began on April 22 and has since killed at least 18 people.
Military commanders from both sides met from 9am to around 11.30am yesterday to affirm the ceasefire implemented this week. Cambodian commander Neak Vong of Royal Cambodian Armed Forces infantry division 41, said the two sides had agreed to allow five unarmed soldiers from each side to be stationed at Ta Krabey and Ta Moan temples – the centre of much of the recent fighting along the border near Oddar Meanchey province. A fence built around Ta Moan temple will also be removed.
ADDITIONAL REPORTING BY DAVID BOYLE AND CHENG LITA
Posted by CAAI News Media at 10:28 pm