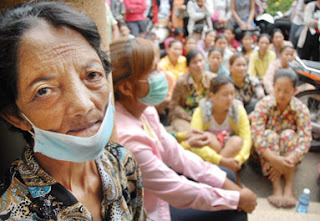 Photo by: Pha Lina
About 200 garment workers formerly employed by the June Textile factory gather at the office of the local rights group Adhoc yesterday to seek help after their factory burnt down in March.
http://www.phnompenhpost.com/
via CAAI
Friday, 06 May 2011 15:02 Phak Seangly
About 200 workers from June Textile Company gathered at Adhoc’s office in Phnom Penh yesterday, asking help in receiving compensation after a fire shut down the factory last month and caused millions of dollars in damages.
Brach Davy, 49, a garment worker who had worked at the company for 18 years, said: “We can’t wait for a solution anymore. We still have to spend money on our homes and food.” She added that some workers had been forced to leave their rented rooms because they could not afford to pay the fees.
Brach Davy said that workers were demanding that the factory offer them the five points of compensation the company is required to pay under Cambodia’s 1997 labour law.
So far, factory owners had only agreed to give US$20 to each employee for each year they had worked with the company.
Chan Saveth, head of monitoring for the rights group Adhoc, said in front of the crowd of workers that Adhoc had no power to put pressure on the factory owners, but they would work with relevant officials to find a solution.
Oum Mean, secretary of state at the Labour Ministry, said yesterday that the issue is still being resolved.
No one at June Textile was available for comment.
Posted by CAAI News Media at 10:21 pm