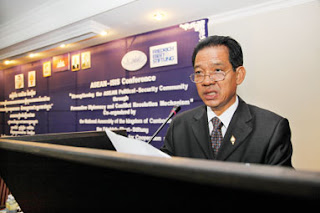 Photo by: Heng Chivoan
Ouk Damry, a member of the National Assembly, speaks during an ASEAN-ISIS conference held in Phnom Penh yesterday.
Friday, 06 May 2011 15:03David Boyle and Cheng Lita
via CAAI
The Secretary General of the Association of South East Asian Nations admitted its failure to resolve Cambodia and Thailand’s border dispute had become “embarrassing” yesterday, as delegates at a Phnom Penh conference of the regional body warned its relevance was threatened by the issue.
Ahead of an ASEAN summit in Indonesia this weekend, Secretary General Surin Pitsuwan said attending regional leaders should give the border dispute a “high level of attention”.
“It has been so embarrassing for ASEAN already, not being able to solve this problem,” he said.
“But ASEAN has tried. I think you have to recognise the fact that ASEAN has never been so pro-active before this year on this issue.”
In February, at a meeting of ASEAN foreign ministers, it was agreed in principle that Indonesian observers would enter the border area. But Thailand has yet to confirm the terms of reference for their deployment.
Pou Sothirak, a Cambodian government advisor, told an ASEAN Institute of Strategic and International Studies conference in Phnom Penh yesterday that if the dispute was not resolved, other member nations would revert to settling disputes by force.
“The border clashes between Cambodia and Thailand are now threatening the very existence of ASEAN – if this now develops into a full blown war ASEAN must do something right,” he said.
Dr Tang Siew Mun, director of foreign policy and security studies at the Institute of Strategic and International Studies in Malaysia, agreed the issue had becoming embarrassing for ASEAN on the sidelines of yesterday’s conference at the capital’s Cambodiana hotel.
“This is definitely a test case on how ASEAN functions as a community because ASEAN needs to, for lack of a better work, to police.
“It needs to keep the peace within the community itself,” he said.
“If we can’t do that, then what’s the point in having this community, we need to be able to solve problems within ourselves.”
The ASEAN charter, which came into effect in 2008, commits the regional body and its member states to a principal of non-interference with fellow members'
Cambodia is due to takeover chairmanship of ASEAN at the beginning of next year.
Thai and Cambodian forces continued to honour a ceasefire yesterday negotiated the previous day, Ouk Damry, a member of the National Assembly told the ASEAN – ISIS Conference.
“The sound of fighting has stopped and villagers returned to their villages,” he said.
Posted by CAAI News Media at 10:56 pm