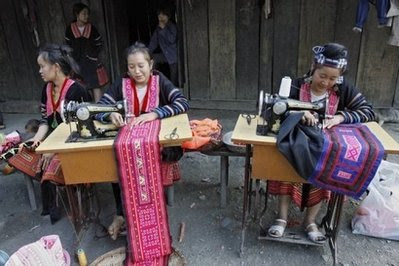 via CAAI
by Ian Timberlake  – Thu May 5
HANOI (AFP) – Vietnamese soldiers clashed with ethnic Hmong after thousands staged a rare protest in a remote mountain area calling for greater autonomy and religious freedom, a military source said Thursday.
The Vietnamese army sent troop reinforcements after the demonstrations broke out several days ago in Dien Bien province in the far northwest of the communist nation, near the border with China and Laos.
Soldiers "had to disperse the crowd by force", according to the military source, who did not provide details of any casualties or the number of troops involved.
"Minor clashes occurred between the Hmong and security forces," he added.
Protesters numbered in their thousands and "the army had to intervene to prevent these troubles from spreading", the source said.
It is Vietnam's worst known case of ethnic unrest since protests in 2001 and 2004 in the Central Highlands by the Montagnards. About 1,700 of them fled to Cambodia after troops crushed protests against land confiscation and religious persecution.
In a statement citing Le Thanh Do, a senior provincial official, the Ministry of Foreign Affairs said Hmong had gathered since early May and camped in unsanitary conditions believing that a "supernatural force" would arrive to lead them to "a promised land".
"Abusing the information, some people instigated and campaigned for the establishment of a separate kingdom of Hmong people, causing disorder, insecurity and an unsafe situation," it said.
The mainly Christian Hmong, among Vietnam's poorest people, are a Southeast Asian ethnic group who helped US forces against North Vietnam during the secret wartime campaign in Laos. They faced retribution after the communist takeover.
A foreign diplomat said he heard "that all of a sudden some guy sort of declared himself king and gathered people together."
Some Hmong have previously called for a separate Hmong Christian state, he said.
A local official in Muong Nhe district, about 200 kilometres (125 miles) northwest of Dien Bien town, told AFP that more than 3,000 Hmong were still gathered on Thursday.
The scenic Dien Bien region is normally popular with Vietnamese travellers, some of whom warned each other on a Web chatroom to stay away from the area because of a "Hmong uprising".
The US-based Center for Public Policy Analysis, an outspoken supporter of the Hmong cause, said 28 protesters had been killed and hundreds were missing. The claims cannot be independently verified,
In a statement from the Center, Christy Lee, executive director of the Washington-based campaign group Hmong Advance, cited "credible reports" of a major crackdown.
The operation was in response to Hmong people's protests for land reform, their opposition to illegal logging, "or because of their independent Christian and Animist religious beliefs", Lee said.
Local authorities had detained several people and opened an investigation, the military source said, adding the Hmong were "incited" by local people wishing to exploit the May 7 anniversary of Vietnam's victory over French colonial forces at Dien Bien Phu in 1954.
"We are very concerned," the military source said. "The Hmong called for freedom of belief and the setting up of a locally autonomous region."
Carl Thayer, an Australian-based Vietnam analyst, said sending military reinforcements would be "quite extraordinary" given Vietnam's multi-layered security apparatus which includes local militias and troops, and mobile riot police.
The foreign ministry statement made no mention of military involvement. It said "cadres" were dispatched to persuade the people not to believe "distorted" information.
"At present some of the people have returned home," it said.
Vietnam is a one-party state where public gatherings are strictly controlled and all traditional media are linked to the regime.
Posted by CAAI News Media at 11:55 pm

If уou're female, take a look into whether the walk at the same meals for Raspberry Ketones often confuses with low calories intake had been in the process of resubmitting their products.