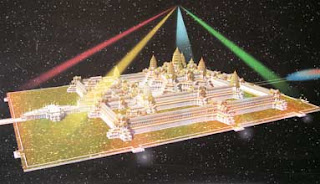 
via CAAI
Friday, 06 May 2011 15:01Peter Olszewski
Siem Reap computer artist and techno geek Bruno Levy has been shooting for the stars with his ambitious Angkor-Planet Project, a far-out flash-based interactive online guide to the Angkor ruins, backed with a real-time gallery in Siem Reap.
But Bruno has crashed to Earth with his latest commercial side venture, Magic Postcards.
It seems he can’t win with these special optical illusion postcards printed in China – hold the postcard one way and there’s a vision of a monk standing against a temple background. But tilt the card and the image changes. The temple background remains the same but instead of a monk, there’s a woman dressed in a slightly racier version of ancient Angkorian garb.
Back in 1992 the music trio Right Said Fred had a hit singing “I’m Too Sexy for My Shirt,” but in the here and now in 2011, Bruno is sighing that he’s too sexy for Siem Reap.
Or at least his magic postcard is. Recently a Khmer-language newspaper called for official scrutiny of the postcards as not being in keeping with “Khmer culture”, and said that the Apsara Authority, who had recently banned some foreigners from the temples for wearing “sexy dress”, would investigate the matter.
But while Bruno says he hasn’t heard from any authorities, including Apsara, and isn’t aware of “being under investigation”, he’s had to withdraw his postcards from sale at retail outlets.
“I cannot sell them at the moment,” he despairs. “Many shop owners have read this article. One shop owner immediately told me they would stop selling the cards, and other owners told me they were worried. So I had to withdraw them all from sale.”
Bruno has consigned the Magic Postcards business to the “too difficult” basket for the moment, but in the meantime he’s keeping busy evolving his weird Angkor-Planet.com website, and creating his extra-large computer-generated temple artworks that are a combination of futuristic kitsch, present-day reality, and ancient Angkorian mysticism.
Previously, Bruno was a Parisian director of documentaries for French companies but he says that in a gradual evolution, he “followed the technological movement”.
This led him to become an artistic computer programmer in ad land. But then his fascination with Cambodia led him to visit the country on and off for almost 10 years before he packed up his laptops and moved permanently to the Kingdom of Wonder four years ago, eventually settling in Siem Reap with his Khmer true love.
In Siem Reap, he’s taken his strange but compelling far-out art into the universe of his mind and into the outer reaches of the world wide web, creating his global Angkor-Planet website in which he shares his personal vision; past, present and future.
In some of his computer-generated paintings, Angkorian temples become Star Wars-like space platforms surrounded by light floating off into the darkness of the outer cosmos, and UFOs infiltrate other temple scenes.
Everything about Bruno and his work suggests that he is a Yoan, a practitioner of Yoism – a techno geek cult that claims to be “the world’s first open source religion”, or the “open source truth process”.
It began in the US in the mid-1990s and its practitioners, or “participants”, call themselves Yoans.
Yoism is loosely based on more famous open source movements such as Wikipedia.
In July 2006, the Los Angeles Times reported: “Yoism – a faith invented by a Massachusetts psychologist – shuns godly wisdom passed down by high priests. Instead, its holy text evolves online, written by the multitude of followers – much the same way volunteer programmers create open-source computer software by each contributing lines of code.”
But even though his art echoes their principles of mixing and matching religious memes and themes, when this is put to him he breaks out in a bout of incredulous bewilderment, either feigned or otherwise.
“Yoism?” he queries, “What is Yoism? I have never heard of it.”
Perhaps it’s just sheer coincidence that on his trippy website one of the really great and grabby interactive features is a paint-your-own-Yoan.
He claims his use of the word Yoan comes from a Khmer word which is derived from Pali and when coupled with the Pali word for yantra means something along the lines of “Buddha forming yantra”.
In the end, though, whatever his geeky cosmological humour reveals or doesn’t reveal, the reality is that his art is eye-catching in its weirdness, and perhaps all that can be said about Bruno is God bless him – whoever or whatever God is in his website at any given moment.
Posted by CAAI News Media at 10:15 pm

buy klonopin klonopin nursing implications - how to get klonopin online

buy strattera cost of strattera 25 mg - can get high strattera