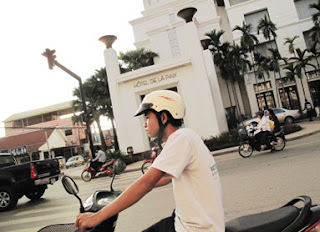 Photo by: Will Baxter


via CAAI
Friday, 06 May 2011 15:02Soeun Say
A man rides a motorbike past the 5-star Hotel de la Paix in Siem Reap city.
The Ministry of Tourism instituted a rating system for hotels over six years ago, though the majority have not registered for a rating, statistics show.
Ministry officials say they have been pushing for wider adoption of the system.
“International tour agents only contact hotels if they hold classifications, as this lets them know precise prices for rooms based on their star rating,” said Ministry of Tourism director of Toursim Industry Department Prak Chan Dara yesterday.
Some 59 of the Kingdom’s 455 hotels have applied for a rating, which ranks hotels up to 5 stars, according to ministry statistics. Hotels that do not apply could face fines of up to 20 million riel (US$4,720), or possibly have operating licences cancelled, said Prak Chan Dara.
Posted by CAAI News Media at 10:19 pm