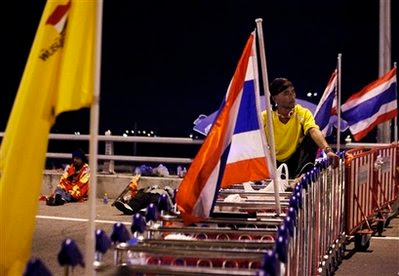 Anti-government protesters man a road barricade made from airport baggage trolleys near the Suvarnabhumi airport compound early Sunday Nov. 30, 2008 in Bangkok Thailand. Anti-government protesters who have closed down Bangkok's airports broke through a police cordon meant to shut them off from supplies, raising fears Saturday of widening confrontations in the standoff that has strangled the country's economy.(AP Photo/Ed Wray)

BANGKOK, Thailand – Unidentified assailants set off explosions at anti-government protest sites Sunday, wounding 51 people and raising fears of widening confrontations in Thailand's worst political crisis that has strangled its economy and shut down its airports.

The first blast occurred inside Prime Minister Somchai Wongsawat's office compound, which protesters seized in August and have held ever since. Suriyasai Katasiya, a spokesman for the protest group, said a grenade landed on the roof of a tent under which protesters were resting, rolled down to the ground and exploded.

At least 49 people were injured, said Surachet Sathitniramai at the Narenthorn Medical Center. He said nine of them were hospitalized, including four in serious condition.

Twenty-minutes after the compound attack, two more blasts rocked an anti-government television station but there were no injuries, Suriyasai said.

In another pre-dawn strike, an explosive device detonated on the road near the main entrance to the domestic Don Muang airport. Surachet and an Associated Press television cameraman said two people were wounded.

No one claimed responsibility for the blasts but Suriyasai blamed the government.

Tensions were rising as a pro-government group scheduled to hold a rally in the heart of Bangkok later Sunday to express its support for Somchai, who is operating out of the northern city of Chiang Mai.

The prime minister has been reluctant to use force to evict the demonstrators from the People's Alliance for Democracy, who on Tuesday night overran Suvarnabhumi airport, the country's main international gateway and one of the busiest airports in the world.

The alliance seized the domestic Don Muang airport a day later, severing the capital from all commercial air traffic and virtually paralyzing the government.

The demonstrators say they will not leave until Somchai resigns, accusing him of being a puppet for ousted Prime Minister Thaksin Shinawatra, the original hate figure for the alliance.

"Brothers and sisters, please be patient. As soon as the government is out of power, we will go home immediately," said an alliance leader Chamlong Srimuang in a speech.

Somchai has appeared at a loss on how to end the crisis but still refuses to step down. The police have their hands tied because of Somchai's reluctance to use force and the military's refusal to get involved, creating the worst political deadlock in the country's history that is taking a severe toll on its economy and reputation.

Hundreds of flights have been canceled, stranding up to 100,000 travelers, devastating the country's tourism-dependent economy and disrupting schedules and budgets of airlines around the world.

Some airlines were using the airport at the U-Tapao naval base, about 90 miles (140 kilometers) southeast of Bangkok. But authorities there were overwhelmed with hundreds of screaming and shoving passengers cramming into the small facility, trying to get their bags scanned through a single X-ray machine.

All rescue flights — to Moscow, Beijing, Kuala Lumpur, Phuket — were delayed, some by several hours. The parking lot was jammed with buses, taxis and vans. The Red Cross set up a tent in the parking area where women handed out sandwiches.

Deputy Prime Minister Olarn Chaipravat, who oversees economic affairs, said foreign tourist arrivals next year was expected to fall by half to about 6 million, resulting in 1 million job losses in the crucial tourism industry.

The Federation of Thai Industries has estimated the takeover of the airports is costing the country $57 million to $85 million a day. Some of its members have suggested they might not pay taxes to protest the standoff.

"The situation has gone from bad to worse, signaling that it (the government) is incompetent at ensuring peace and order," the Thai Chamber of Commerce said in a statement Saturday.

Some Thais are looking to the judiciary for a way out of the crisis. The Constitutional Court is expected to rule as soon as next week on whether three parties in the governing coalition including Somchai's People's Power Party committed electoral fraud.

If found guilty, the parties would be dissolved immediately, and executive members including Somchai would be barred from politics for five years. Non-executive members could, however, switch to another party.

Others are counting on the monarchy to end the standoff. The revered King Bhumibol Adulyadej, who has repeatedly brought calm in times of turbulence during his 62-year reign, will give his annual birthday-eve speech on Dec. 4.

"No one else can fix this. The country is so divided. The only uniting figure we have is the king. If he tells both sides to step back, they will," said a 36-year-old coffee shop owner Natta Siritanond.
___
Associated Press reporters Nicholas Tatro, Vijay Joshi and Michael Casey contributed to this report.
Posted by CAAI News Media at 9:14 pm