Riot police have fled a checkpoint outside Thailand's main international airport after clashes with anti-government protesters. 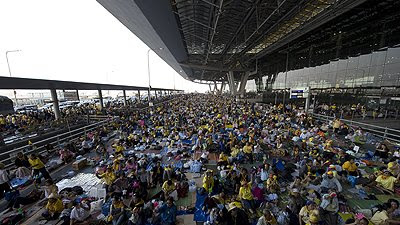 Demonstrators rally outside Bangkok's Suvarnabhumi airport
About 2,000 police have been deployed around Suvarnabhumi international airport after activists holed up inside forced the cancellation of all flights.

About 150 police at a checkpoint half-a-mile from the terminal jumped in their vehicles and drove away when they saw a convoy of protesters speeding toward them.

Local journalist Andrew Drummond, who is with the protesters in Bangkok, said the activists were well-armed and thousands strong.

"They seem to have a very good spy network, and they are heading the police off before they get a chance of getting into the airport," he told Sky News Online.

"Thousands of protesters here have moved out of the airport, they have got iron bars, wooden clubs, if that checkpoint has gone it wouldn't surprise me.

"Nothing can resist that - there's massive amounts of people here at the moment."

Officials said the airport will stay closed until at least Monday evening, leaving thousands of tourists stranded in Bangkok. 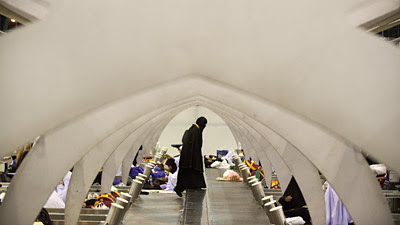 Muslim Thai woman stranded on her way to Mecca at Bangkok airport
Flight operators had been telling passengers that the airport was expected to open on Sunday.

Protesters have seized both of Bangkok's airports in their effort to unseat the government. They have also taken a police officer captive as tensions escalate.

The kidnapping intensifies fears that the four-day siege will end in violence, despite the Thai prime minister pledging to use peaceful methods to resolve the issue.

The confrontation has severed the capital from civilian air traffic and stranded some 100,000 tourists in the country.

Britain's Foreign Office Minister Bill Rammell described the situation as "deeply concerning".
Protesters are demanding the resignation of the government it accuses of being a puppet of former prime minister Thaksin Shinawatra.

Shinawatra, who recently relinquished control of Manchester City football club, was ousted by a 2006 military coup and fled overseas to escape corruption charges.

Several hundred Britons have been trapped in Thailand including the pregnant wife of England rugby league captain Jamie Peacock.

The 30-year-old, who plays for Leeds Rhinos, said he was worried not enough was being done to help those stranded.

One British tourist said no one was offering them "a way out" of the country.

Carol Hobbs said: "They seem to think because we are here and we are comfortable and we are eating and drinking and safe then that is fine."

She added: "The embassy in Thailand, Bangkok, is closed. It closed yesterday at one o'clock and doesn't open again until Monday."
Posted by CAAI News Media at 7:02 am