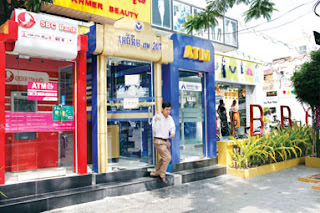 Photo by: Sovan Philong
A security guard drives past scaffolding that was put in place to prevent landslides at Bokor Mountain, the future site of a Sokha hotel.
http://www.phnompenhpost.com/


Wednesday, 27 April 2011 15:01May Kunmakara
Increased lending from the Kingdom’s 30 commercial banks during the first quarter was largely due to increased demand from the domestic agriculture sector, according to National Bank of Cambodia Director General and Spokeswoman Nguon Sokha.
Lending at the end of March totalled US$3.467 billion, a 4.33 percent increase on $3.323 billion extended by Cambodia’s banks on December 31, 2010, she said.
“We see that our commercial banks are increasing loans and deposits after the crisis,” said Ngoun Sokha, adding new lending “is mainly focusing on the agricultural sector, which has greatly increased compared to other [sectors] and business activities.
“The banking sector has improved in line with the whole economy, resulting in more loan accessibility,” she said.
Lending to the construction and real estate sector has languished behind other sectors, she noted.
Nguon Sokha also pointed to an increase in deposits, which totalled $4.001 billion at the end of March, a 3.23 percent rise from $3.876 billion at the end of December last year.
Canadia Bank Vice President Dieter Billmeier wrote that the bank’s total lending increase 37.74 percent during the first quarter to $562 million by the end of March, while deposits increase 41.12 percent to $948 million.
“The economy and business in Cambodia is growing again with a remarkable pace,” he said.
“As far as our loan portfolio is concerned we have a special focus on agriculture and food processing activities nation-wide. But in general we are serving all other sectors and industries.”
He predicted Canadia Bank and the rest of the banking sector would have a strong 2011.
Foreign Trade Bank of Cambodia saw its total deposits grow by 29 percent during the quarter to $296 million, and gross loans and advances increase by 38 percent during the quarter to $145 million at March 31, according to its unaudited figures.
“Our loans are mainly granted to service industry, agriculture and micro-finance institutions,” said Gui Anvanith, general manager and board member.
“We have increased our exposure to the agribusiness sector since we believe that this sector will continue to experience sustainable growth in light of better access to international markets as well as stronger government support,” he said.
Kookmin Bank Cambodia President and Chief Executive Officer Jang Ki-sung said the number and amount of its loans increased by 100 percent and 112.6 percent respectively during the quarter. Kookmin launched its first branch in the Kingdom in 2009.
South Korea-based Hwang DBS Commercial Bank, which began operation in July 2009, has seen number of deposits grow to 1,191 and 154 loans customers as of 31 March 2011.
“This growth was complimented by our ability to reach out to more customers in the housing loan and SME sectors ...,” wrote Hwang DBS General Manger Han Peng Kwang. He added the bank had expanded its domestic reach by adding two more branches last year.
Ngoun Sokha said she expects the domestic banking sector to have a strong 2011.
“Relying on our surveys as well as the economic climate in the region and the world, we are in a very favourable environment to make our whole economy better.”
“It will require more loans, to meet the economy’s needs,” she said.
Posted by CAAI News Media at 11:04 pm