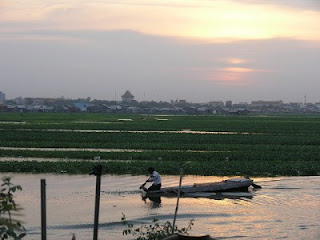 
By Luke Hunt
February 3, 2011
They’re doing it tough in Indochina. Le Hoang Hung, a 50-year-old Vietnamese journalist who was set on fire while sleeping, has died from his injuries while across the border in Cambodia.
Hung had worked for The Worker newspaper mainly covering the southern Mekong Delta, and earned himself a reputation for investigating official corruption. According to reports, he was scheduled to cover a court case involving a local official being sued for misappropriation of land.
Vietnam is a tough place for journalists. The government treats those who stray from the official line as pariahs and the country’s bullies and gangsters are notorious thugs. Hung’s wife, describing the attack, says she was sleeping in another room when an intruder broke into their home and doused him with chemicals. Minutes later he was alight.
‘The whole family was sleeping and all of a sudden I heard my husband screaming,’ she told a local news portal. The family threw water on the flames and rushed him to hospital, but he died there ten days later.
The shameful and sometimes barbaric situations Vietnamese journalists have found themselves in can’t be compared with the comparatively mild shenanigans that occur in Cambodia. But the fear is that Cambodia could be losing its lustre as a home for the free press.
It’s a title few would have expected of the country given its history, particularly as it emerged from decades of war. In the early to mid-1990s, the United Nations arrived, and so did the NGOs and the Phnom Penh Post. A press club was formed that thrives today as the Overseas Press Club of Cambodia (OPCC) and the authorities appeared tolerant of journalists who knew their own mind.
As such, more than a few eyebrows were raised last Friday when Om Yentieng, head of the government’s anti-corruption unit and the Cambodian Human Rights Committee, confiscated tapes from journalists after a press conference he’d given. Om Yentieng had objected to questions surrounding a grenade attack on opposition supporters in 1997 when 16 Cambodians died and more than 100 people were injured. Inquiries have failed to establish who was responsible.
A government spokesman, Phay Siphan, later said that officials had the right to confiscate recordings if the questions create trouble. He also noted officials had a right to protect their privacy and dignity.
What this had to do with the questions surrounding the 1997 grenade attack is anybody’s guess, and the OPCC noted that Om Yentieng’s actions were totally incompatible with at least three of Cambodia’s own laws. Additionally, the Cambodian Constitution guarantees press freedom.
The confiscations followed an incident in which police held down photographer Sovan Philong of the Phnom Penh Post and confiscated his camera. He sustained minor injuries, while Hong Menea, an apprentice photographer, also had his equipment seized.
The two reportedly held government-issued press cards and were documenting evictions around Boeung Kak lake in central Phnom Penh. Their gear was returned after their photos had been deleted. It's a worrying trend, though one that's well established east of the border.
Posted by CAAI News Media at 7:56 am