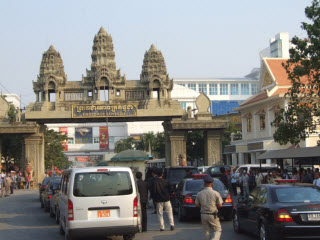 via CAAI
SIEM RIEP, Feb 3 - The seventh meeting of the Joint Commission (JC) on bilateral cooperation between Thailand and Cambodia on Thursday pledged that the two neighbours will not let the renewed tension regarding the border dispute to obstruct bilateral cooperation, while Thai Foreign Minister Kasit Piromya is scheduled to visit the two convicted Thais incarcerated in a Phnom Penh prison on Friday.
Thai Permanent-Secretary for Foreign Affairs Theerakul Niyom made the remarks following the meeting of JC senior officials held in the Cambodian city Siem Riep between Thursday and Friday that the Thursday meeting between two sides went well.
Although the topics of discussion include a wide range of cooperation such as education, social, culture and economic affairs, the renewed tension on border dispute and the arrest of the seven Thais by Cambodian soldiers overshadowed the annual meeting.
Mr Theerakul said the meeting expected that the Thai-Cambodian Joint Commission on Demarcation for the Land Boundary (JBC) will be a mechanism that solves the border conflict.
The foreign ministry official stated conflict can sometimes occur between the neighbouring countries, but one problem should not stall cooperation in other areas.
Foreign Minister Kasit led the Thai delegation to the bilateral meeting Thursday morning and he is scheduled to hold talks with his counterpart Hor Namhong, during which a discussion on Thai- Cambodian conflicts is expected.
It is expected that help to resolve the case of the two Thais -- Veera Somkwamkid, Thai Patriots Network activist, and Ratree Pipatanapaiboon, his secretary -- both sentenced to prison terms by a Cambodia court for espionage, will be raised during the talk.
Mr Kasit also plans to visit Mr Veera, now being detained in Phnom Penh's Prey Sar Prison, and Ms Ratree, still staying at Thai embassy, to discuss how to help them after the pair decided to appeal the Cambodian court verdict.
Phnom Penh Municipal Court on Tuesday sentenced Mr Veera to eight years in jail and fined of 1.8 million riels (450 U.S. dollars) and Ms Ratree to six years in prison and fined 1.2 million riels (300 U.S. dollars).
Veera and Ratree were among the seven Thais, including Democrat MP for Bangkok Panich Vikitsreth, arrested Dec 29 by the Cambodian authorities in Banteay Meanchey province contiguous to Thailand's Sa Keo province, for illegal entry.
The five others received nine-month suspended jail terms on Jan 21 and returned to Thailand on Jan 22. (MCOT online news)
Posted by CAAI News Media at 7:51 am