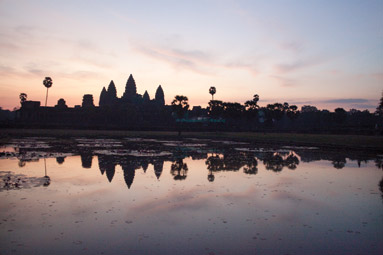 This is one of the many reasons why tourists from all over the world flock to Siem Reap province. The magnificent Angkor Wat is captured in a reflective sunrise moment
via CAAI
Friday, 04 February 2011 15:01 Post Staff
The majestic sunrise over the towers of Angkor Wat is the quintessential image of Cambodia. Captured by thousands of amateur photographers each year, it is the bedrock upon which the country’s tourism industry is founded.
Last year more than 1.1 million international tourists bought tickets to enter the Angkor Archaeological Park, a 25-percent rise on the preceding year. As more tourists visit the temples, the strain on the ancient structures intensifies.
The World Monuments Fund is fighting to conserve the Angkor compound. The New York-based organisation has been working in Cambodia since 1991 and has three sites within the park, including a project to conserve the roof of the gallery that houses the bas-relief depicting the Churning of the Sea of Milk.
“Water is seeping through into the wall and touching the bas-relief – that’s why we want to repair the roof,” says Cheam Phally, the senior architect for WMF. The project is due to finish in the middle of 2011 and is painstaking work.
The team of stonemasons has a small worksite in one corner of Angkor Wat’s compound.
Here all of the 700 blocks being conserved are numbered and their condition recorded. Once all the soil is removed and the stonework repaired, the condition is once more recorded before the block is put back into place. Carvings are left untouched.
Where necessary new blocks are cut to replace previous stonework that has either disappeared or is beyond repair.
Cheam Phally explains how previous conservation work involved replacing the stone blocks with concrete. This affected the natural drainage systems of the blocks, placing the world famous bas-relief at risk.
However, it is neither the weather nor the relentless stream of tourists that poses the greatest threat to the temples, according to Cheam Phally.
“The impact of tourists on the temples is small, but the environment outside is not yet good,” she says. “There is more damage from the cars, tuk tuks and buses than from the tourists.”
This is something the Apsara Authority also recognises.
Responsible for preserving the heritage of Angkor, Apsara Authority coordinates the conservation works funded by various governments taking place around the archaeological park. It is also working to determine responsible tourism solutions so everyone can enjoy the temple in the future.
“We have battery cars to take visitors around the temples,” says Chrun Sophal, AA’s director of the department of communications.
“If all the tourists come together at one site it can be dangerous, but we are trying to separate them,” he says.
Chrun Sophal cites various spots that AA has identified for watching the sunset, thus reducing the pressure placed on the traditional sunset- watching spot on Phnom Bakheng.
Watching the stream of tourists flocking down Phnom Bakheng just after the sun has set, it is hard to see what positive effect this measure has had. Many in the tourism industry feel that more radical measures are needed, such as the enforcement of no walking and climbing zones throughout the temples.
Although there are signs indicating where tourists are not allowed to walk, these are largely ignored.
“Some people climb without thinking and touch the stones,” says Cheam Phally. “Sometimes they follow the walkways we prepare, but sometimes they just walk where they want.”
With tourism in Angkor back on the rise, the pressure on Cambodia’s most cherished treasure seems set to increase. Cheam Phally and her team of stonemasons look set to be kept busy for many years to come.
Posted by CAAI News Media at 11:22 pm