via CAAI
Published: 3/02/2011
The arrest of People’s Alliance for Democracy (PAD) key member and former senator Karun Sai-ngam has other yellow-shirt leaders wondering just what the Democrat-led government is really about.
Mr Karun was arrested on Wednesday as he arrived back from Cambodia, on an old arrest warrant in connection with the PAD's blockade of Suvarnabhumi and Don Mueang airports in late 2008.
"We can't help but notice the timing of his arrest," PAD spokesman Panthep Phongphuaphan said on Thursday.
"The government has had lots of time to seize him earlier, but did not. 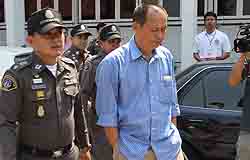 Former senator Karun Sai-ngam (centred)
"We wonder if they are just playing politics, because Mr Karun is a member of the legal team of the Thai Patriots Network (TPN) assigned to assist the two Thais jailed in Cambodia."
PAD co-leader Chamlong Srimuang said that the group's key members and spokesman have taken full responsibility for the ongoing rally, so the yellow-shirt supporters should listen only to them about what action should be taken next.
He said a House dissolution was not part of the PAD’s demands and would not help lower the rally's intensity.
Another yellow-shirt core member Praphan Khoonmee said speakers at the rally will not address not only issue of national sovereignty, but also the corruption in the government under Prime Minister Abhisit Vejjajiva - such as in the palm oil industry.
"The Democrat Party is not the same as it was. It has discarded its political ideology," Mr Praphan said.
Deputy Prime Minister Suthep Thaugsuban said Mr Karun's arrest should not fan the ongoing protest by TPN demonstrators near Government House.
Mr Suthep said Mr Karun was arrested in connection with the airport blockade case.
He said most of the other suspects in this case had earlier surrendered to fight charges levelled against them. Seven had not, including Mr Karun, and were liable to arrest under a court warrant.
Mr Suthep hoped the TPN - a yellow-shirt splinter group - would not take this matter as a reason to step up their pressure for the government to take action to bring home TPN coordinator Veera Somkwamkid and his secretary Ratree Pipatanapaiboon, who were sentenced to eight and six years in jail respectively by a Cambodian court for espionage. 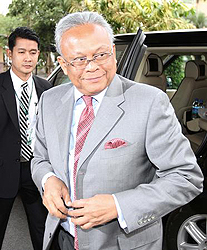 The deputy prime minister in charge of security affairs said he did not understand why the PAD had set a Feb 5 deadline for the government to bring home the two convicts.

"Instead of raising the pressure, the PAD should come and offer advice about what should be done to secure the release of the two activists," Mr Suthep said.
He insisted that the government had done what it could to help them and the public was aware of this.
On Foreign Minister Kasit Piromya's trip to attend the 7th Thai-Cambodian Joint Commission meeting for bilateral cooperation in Siem Reap today, Mr Suthep said he believed Mr Kasit, who was well-versed in the current situation, would be able to convey a message to Cambodian Prime Minister Hun Sen that Thailand wants peace, not war.
Asked whether a control control drill by the metropolitan police using real tear gas canisters was intended to send a signal that the protesters would be dispersed, Mr Suthep said the police were only making themselves fully prepared.
They were duty-bound to protect important locations, including Government House, parliament, the Foreign Ministry and the Cambodian embassy.
Posted by CAAI News Media at 8:00 am