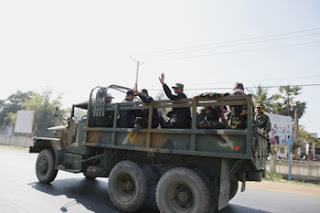 Photo by: Heng Chivoan
Royal Cambodian Armed Forces soldiers travel in the back of a military truck down National Road 5 toward the Cambodian-Thailand border in Kampong Chhnang province’s Kampong Leng district on Tuesday.
via CAAI


Thursday, 03 February 2011 19:24 Cheang Sokha
Siem Reap province
Thai Foreign Minister Kasit Piromya is set to meet tomorrow with two Thai nationals convicted of espionage in Cambodia on Tuesday in a high-profile case that has strained the fragile ties between the two countries.
Cambodian Ministry of Foreign Affairs spokesman Koy Kuong said today that Kasit planned to meet with Veera Somkwamkid, a well-known activist within Thailand’s nationalist Yellow Shirt movement, and his associate, Ratree Pipatanapaiboon.
Veera and Ratree were convicted by the Phnom Penh Municipal Court on Tuesday of espionage, illegal entry and unlawfully entering a military base after being arrested in Banteay Meanchey province last month.
“[Kasit] will meet the Thai detainees at Prey Sar prison,” Koy Kuong said.
Veera and Ratree face jail terms of eight and six years respectively following their convictions on Tuesday.
They were arrested along with five other Thais, including parliamentarian Panich Vikitsreth, who were found guilty of illegal entry and unlawfully entering a military base last month but were freed on suspended sentences.
Thai Foreign Ministry spokesman Thani Thongphakdi said the convictions would likely be raised on the sidelines of talks scheduled for tomorrow in Siem Reap between Kasit and Cambodian Foreign Minister Hor Namhong, though he added that the next step in the case depended on Veera and Ratree.
“I think at the moment they are consulting with their lawyers about lodging an appeal, so it very much depends upon what they decide,” he said.
Pich Vicheka, Veera’s lawyer, said he was preparing to challenge the conviction before the Appeal Court, but needed to consult with his client first.
The Bangkok Post reported that Thai Deputy Prime Minister Suthep Thaugsuban and National Security Council head Thawil Pliensri traveled to Phnom Penh today, where they were expected to meet with Prime Minister Hun Sen to “discuss the strained relations between the two countries”.
Suthep reportedly said Thailand “respects the verdict handed down by the Phnom Penh Municipal Court” and does not want to provoke conflict with Cambodia.
Information Minister Khieu Kanharith said today that he did not “have the authority” to discuss Suthep’s reported visit. Thani said he had no information on the matter.
Thai Prime Minister Abhisit Vejjajiva and members of his government have faced pressure to resolve Veera’s case by Yellow Shirt protestors who have demonstrated in the Thai capital this week.
Abhisit came to power in December 2008 following a wave of Yellow Shirt protests that shut down Bangkok’s main airport.
Kasit himself joined the protests, though the Abhisit administration has since attempted to distance itself from hardline members of the nationalist movement.
Troops stationed at the border near Preah Vihear temple reported this week that both sides had received new equipment and reinforcements as controversy erupted over Veera’s conviction and Cambodia’s placement of a flag at Wat Keo Sekha Kirisvara, a pagoda adjacent to Preah Vihear.
Yim Phim, commander of Royal Cambodian Armed Forces Brigade 43, said yesterday that the buildup had yet to lead to conflict and that the situation at the border was calm.
“We soldiers are on high alert because we don’t know what will happen next,” he said.
Touch Phoeung, deputy chief of Preah Vihear province’s Kantuot commune in Choam Ksan district, said villagers had taken precautions in the wake of what he called the largest military buildup in the area in years.
“Our villagers are prepared to defend themselves. They have dug out bunkers to protect themselves in case war happens,” he said.
ADDITIONAL REPORTING BY THET SAMBATH AND JAMES O’TOOLE
Posted by CAAI News Media at 7:46 am