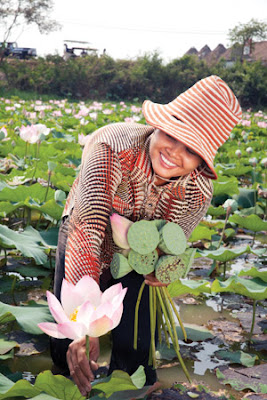 Rice takes a back seat as Uch Panha picks lotuses in her field alongside the road from Siem Reap to Tonle Sap Lake.
via CAAI
Friday, 04 February 2011 15:00 Post Staff
AS we pull up on the roadside between Siem Reap town and the Tonle Sap Lake, Uch Panha, 28, is selling lotus plants to a Korean tourist. She hands across two bunches, receiving a dollar.
Like many in Cambodia’s second-poorest province, Panha used to depend on rice farming to support her family. Two years ago, she borrowed US$1,500 from her mother in order to lease five hectares of land to grow lotus plants.
Before she borrowed the money from her mother, life was very difficult for her.
“When I grew rice, we didn’t have enough money to live,” she says. “Now I grow lotus I have money to buy something every day.”
Uch Panha makes up to $25 per day from the many tourists who break their journey here. While we talk, several couples stop their bikes to take their photograph surrounded by the flowers. Some leave a small tip.
The lotus has a six-month growing season between November and April, during which Uch Panha can grow two crops. Outside of these months she reverts to rice farming.
Lotus farming might not have changed the lives of Panha and her three children, but at least things are easier than before.
“I have more money to support my children going to school,” she says. Uch Panha plans to lease a further five hectares of land for the next growing season.
Posted by CAAI News Media at 11:11 pm