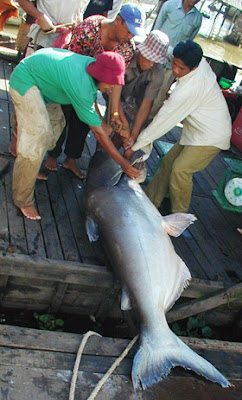 Photo by: WorldFish center
Fishermen hoist a giant Mekong catfish in 2006.
via CAAI
Thursday, 03 February 2011 20:23 Summer Walker
Conservation International has named a biodiversity area that includes all of Cambodia as the most endangered such region in the world, claiming it has only 5 percent of its original habitat remaining.
The environmental group released a list on Wednesday of the world’s 10 most threatened “forest hotspots”, grouping Cambodia within the “Indo-Burma” region, which also includes Burma, Thailand, Cambodia, Laos, Vietnam and small areas in India and China.
All 10 regions on the list have lost at least 90 percent of their original habitat and contain at least 1,500 unique plant species, CI said.
Conservation International regional director David Emmett called Cambodia the “jewel” of the Indo-Burma region.
More than a quarter of the Kingdom, he said, has been classified as protected land, in contrast to regional neighbours such as Thailand and Vietnam that have nearly decimated their forests.
“Cambodia has some of the highest concentrations of the most endangered species in the hotspot,” he said.
Logging and development have taken their toll on Cambodia’s forests and wildlife, however.
Government officials have announced plans for numerous hydropower dams on the Mekong River and elsewhere, projects that pose a critical threat to local fish populations, said Eric Baran, a senior scientist at the WorldFish Centre.
In its 2010 annual report, the Forestry Administration said more than 1.3 million hectares worth of economic land concessions, or roughly 7 percent of Cambodia’s territory, have been granted to date.
The FA recommended a review of existing concessions to ensure that the land is being used productively.
Posted by CAAI News Media at 7:41 am