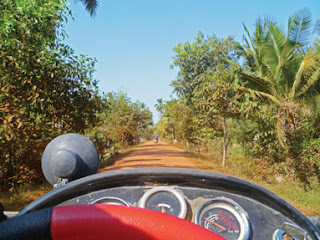 The view from the front seat of the buggy – before we went off-road. Photo by: CRAIG MILES
via CAAI
Friday, 04 February 2011 15:00 Craig Miles
I had not driven a manual car in over a year, so I was a little nervous as I walked into the Flomo Adventure Tours office near Old Market in Siem Reap, ready to go on one of their off-road buggy adventures.
In the end it turned out to be the experience of a lifetime – despite my face being covered in a layer of orange dirt as I exited my chariot.
Flomo Adventure Tours was established in November 2010 by Carol Poquet. She originally came to Cambodia to run a guesthouse, but instead recognised an opportunity to start adventure tours as nothing like it existed in Siem Reap at the time.
First up, Poquet purchased two 650cc Kinroad off-road buggies from China. They each have water-cooled engines to ensure they survive all conditions, and a maximum speed of 85 km/h. The tours are led by a guide, but the customer drives the buggy.
Driving out of Siem Reap town was the scariest part of the trip. I had not driven in Cambodia at all since arriving over two months ago, and never dared think of myself at the wheel. Driving here is different, to say the least, compared to driving back home in Australia. I like to think that’s why I managed to stall my buggy three times in quick succession.
Like any manual car, though, once I got the hang of it the rest was plain sailing.
One of the best features of the buggy was that it could pick up easily in third gear, rather than having to shift to second or first when dropping speed; convenient when bouncing over bumps on the dirt tracks.
The trip I chose is one of the most popular, according to Poquet. It lasted for about two hours and my tour guide Dan Sayer, also the manager of Flomo Adventure Tours, was in front of me on a dirt bike during the whole trip, so I always felt safe.
He gave signals when needed – a raised closed fist to stop; a raised open hand if we needed to be careful; and pointing if there was something specific to look out for, such as a pothole or wild animal.
From Siem Reap town we went through West Baray, eventually stopping at Baray Lake for a rest.
We then drove around the lake while children ran out from their homes to catch a glimpse of the buggy and wave manically at us.
The next stop was at the Siem Reap Silk Farm for a free tour, then on past the rice fields and back into Siem Reap.
The trip was certainly a memorable adventure as well as a chance to see parts of Siem Reap not normally sought out. Some sections of the tracks were quite bumpy, but that only added to the fun, and there were a few small water holes along the way too, which caused muddy splashes when driven through. Bring a change of clothes, just in case.
There are numerous other options for tours and the crew at Flomo Adventure Tours are discovering new routes all the time. Poquet said the team discovered a new route to Bakong Temple just last week.
Among the options is a one-hour sunset tour, a half-day tour including a boat trip and visit to the floating village, and a full-day tour where trips can go to the waterfalls and the temple at the Khulen mountain, a jungle temple at Beng Mealea, or the waterfall temple at Kbal Spean.
Prices range from $20 to $190, depending on the package and how many people sign on. There are two buggies, so up to four people can go on a tour at once.
To drive, customers must have a valid driver’s license and be over the age of 16, but children aged seven and over can ride as passengers.
More information and bookings, visit http://www.flomoadventuretours.com/  or telephone 063 964 586.
Posted by CAAI News Media at 11:13 pm