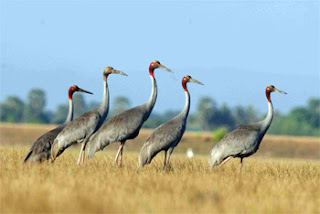 Photo by: Jonathan Eames/BirdLife International
Sarus cranes are seen in the Anlong Pring bird sanctuary in Kampot province’s Kampong Trach district last year.
via CAAI
Thursday, 03 February 2011 18:33 Buth Reaksmey Kongkea
The Cambodian government has issued a sub-decree that establishes a conservation area in Kampot province for Sarus Cranes, a vulnerable species that has gone extinct in multiple Asian nations.
The sub-decree was signed by Prime Minister Hun Sen on January 6 and allots 217 hectares of wetlands in Kampot province’s Kampong Trach district as a reserve.
The area would protect the Sarus Crane subspecies sharpii, which mostly resides in the Kingdom but has seen population numbers dwindle to about 1,000.
Up to 30 percent of Cambodia’s Sarus Cranes reside in Kampong Trach during the dry season, using the wetlands as a feeding ground.
Men Soriyon, deputy director of the government’s Forest and Biodiversity Conservation Department, said the new reserve would help to maintain their food source.
“This protected area is for Sarus Cranes that have flown in from different places for finding food during the dry season,” said Men Soriyon.
“The main purpose of the sub-decree is to preserve and protect our cranes from dying or being killed in these areas.”
The sub-decree was the result of a nearly five-year long process spearheaded by BirdLife International, an organisation that previously worked with the government to establish a crane reserve at Boeung Prek Lapouv in Takeo province in 2007.
A statement from BirdLife said the process was lengthy because of the land’s proximity to Vietnam, “where rapid economic development has pushed up land prices”.
“This factor was the main reason why the designation process took so long, as local vested interests tried to thwart the process,” the statement read.
The Kampot province crane reserve is smaller than its Takeo province counterpart by more than 9,000 hectares.
Bou Vorsak, acting programme manager for BirdLife in Cambodia, said conservation areas could be beneficial to the government in terms of strengthening the country’s emerging market for eco-tourism.
“Many tourists like to go to Kep for the beach, and they can reach the [Kampot reserve] to see cranes within a half-hour,” said Bou Vorsak.
“It could be important as an eco-tourism site in the future. This can also bring income to the local community.”
Sarus Crane populations have been decimated in recent decades due to the degradation and loss of wetlands and the ingestion of pesticides.
Hunting has also played a factor in depleted numbers, with Bou Vorsak noting that “these are big birds and easy to hunt”.
The International Union for Conservation of Nature lists the Sarus Crane as a “vulnerable” species.
Other subspecies live in India and northern Australia in greater numbers, but the worldwide population is approximately 20,000.
Populations have gone extinct in Thailand and the Philippines.
Posted by CAAI News Media at 7:39 am