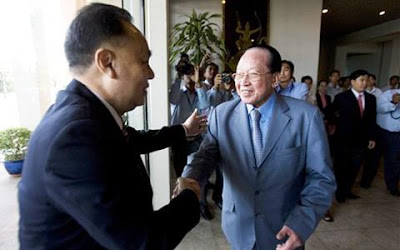 Photo: AP
Foreign Ministers, Hor Namhong, right, of Cambodia, and Kasit Piromya, left, of Thailand, shake hands before a meeting in the Foreign Ministry in Phnom Penh, Cambodia, Thursday, Dec. 30, 2010.
“There is no topic about this.”

The foreign ministers of Cambodia and Thailand will meet in Siem Reap on Friday, for already scheduled bilateral discussions, but there is no specific plan to discuss recent escalation of border tensions, an official said Thursday.
Both sides only recently relaxed a major military build-up along the border of Preah Vihear province, but the December arrests of a Thai delegation for illegally crossing the border and Cambodia’s refusal to lower its flags from a contentious pagoda have rekindled border concerns.
“There is no topic about this,” Koy Kuong, a spokesman for Cambodia’s Foreign Ministry, said Tuesday, referring to the pagoda. “The Keo Sekha Kiri Svarak pagoda is legally and fully located in Cambodian territory.”
Thai officials have maintained that the pagoda sits in disputed territory, according to a map that differs from a version draw under French colonial administration, which Cambodia adheres to. They have asked that Cambodia stop flying its flag over the pagoda, located near Preah Vihear temple, a Unesco World Heritage site and a source of nationalistic fervor on both sides.
Earlier this week, Phnom Penh warned Bangkok to avoid war rhetoric, after Thai Prime Minister Abhisit Vejjajiva was quoted in local media saying the “use of force” would be a last resort.
The Bangkok Post reported Thursday that Thai Foreign Minister Kasit Piromya will bring a message to Cambodia Friday saying Thailand has no intention of war.
The Bangkok Post also reported Thursday a high-level Thai delegation had arrived Thursday to discuss with Prime Minister Hun Sen the “strained relationship” between the two countries. Cambodian officials were unable to confirm such a meeting.
Posted by CAAI News Media at 8:08 am