Puppets work on so many levels 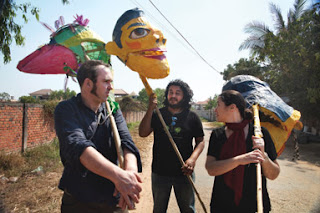 Jig Cochrane, Stuart Cochlin and Bina Hanley show off puppets
via CAAI
Friday, 04 February 2011 15:00 Post Staff
ONE day each year the streets of Siem Reap are thrown open to the city’s children, as they walk tall with their even taller puppets. The brainchild of Stuart Cochlin, Jig Cochrane and Sasha Constable five years ago, the Puppet Parade has now become an established fixture in the Siem Reap community calendar.
Last year thousands flocked in from surrounding villages to see the parade, says Bina Hanley, sales and marketing officer for the Puppet Parade. “We collected just over US$1,000 in the buckets during the parade alone mainly in 100 and 500 riel notes,” she says.
The project involves 12 NGOs working with children around Cambodia’s main tourism town. Sometimes the NGOs create their own puppets, at other times they work with another organisation to create one.
Each year artistic director Jig Cochrane flies in from the United Kingdom to coordinate the three-week project. Cochrane has 20 years’ experience of organising community carnivals around the globe.
In the first week he develops some creative ideas with six student artists from Ponleu Selpak Circus in Battambang and local artists from Siem Reap.
The following week the children are let loose on their puppets. It takes about two days to create a puppet, the longest of which is a 15-metre-long Naga, or serpent. In the final week the team makes the frames for the puppets and rigs up the lighting.
All the children who join in the workshops leave with a sense of achievement.
“You don’t have to be an artist to make an incredible puppet and feel very proud of it,” says Cochrane.
“Lots of these kids have come off the street.
“This is their time to shine in the town, to walk through the town to the applause of the town.”
The parade also has an educational aim. Each year an expert talks to the children about the animals they are creating. Often these are endangered. In previous years a tiger and an Irawaddy dolphin were created. This year it is the turn of the giant ibis.
Other educational components involve health lessons. Road safety puppets have encouraged the use of motorbike helmets and the “toothbrush man” helped promote dental hygiene.
Cochrane believes the parade is helping to “reintroduce art forms into the country” that were lost during the Khmer Rouge period.
Posted by CAAI News Media at 11:17 pm