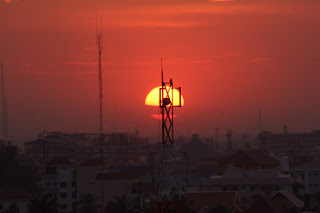 Photo by: Heng Chivoan
A mobile phone tower in Phnom Penh’s Chamkarmon district partially eclipses the sun in the late evening.
via CAAI
Thursday, 03 February 2011 20:13 Jeremy Mullins and Sen David
All equipment owned by mobile phone tower builder Infra Cellular (Cambodia) Company must be torn down on Kingdom sites in the next week, after the Ministry of Posts and Telecommunications cancelled its licence to operate.
Minister of Posts and Telecommunications So Khun said today the firm had held a licence to build communication towers, capable of being shared between mobile companies, for more than two years, but the firm “did not come to work”.
“Infra Cellular did not do anything wrong, but it did not come to work to develop and take its position,” he said, adding that the lack of action had led the ministry to revoke its permit.
A prakas, or edict, circulated on Wednesday and dated January 26, declared that the company “has to pull down all their materials and related equipment at each location inside Cambodia within 15 days”.
It added that all relevant government institutions should comply with the edict from the date of signature.
The firm was first licenced to build and share towers in the Kingdom in February 2007, according to the prakas.
Infra Cellular (Cambodia) Company representatives could not be found to discuss the situation today.
The cancellation of Infra Cellular’s permit is thought to leave the US-majority owned Tower Master Cambodia Company (TMCC) as the only such firm operating domestically.
TMCC’s permit allows it to build communications towers and rent space to service providers in Cambodia.
Once it has built a tower in an area, no other company may build within 15 kilometres of the tower, which would help avoid “unsightly tower farms”, TMCC’s executive vice president Anthony Ortolani previously told The Post.
Minister So Khun has also previously voiced support for the tower sharing initiatives.
Last month, he said that Cambodia had over 60 percent mobile penetration.
ADDTIONAL REPORTING BY MAY KUNMAKARA
Posted by CAAI News Media at 7:43 am