By Peter Janssen and Robert Carmichael
May 5, 2011 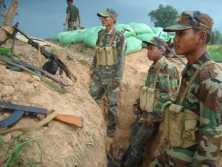 Cambodian soldiers guard at the Cambodia-Thailand border in Oddar Meanchey province, 01 May 2011. The Thai-Cambodia border situation was improving but it remains too early for people who were evacuated from the area to return home, the Thai prime minister said on 01 May. The most recent clash ended early 30 April and left 10 Thai soldiers wounded, the Thai army said. That was the second breach of a ceasefire agreed to by local field commanders and then approved by their superiors on Thursday. The conflict is over disagreement on the border, particularly a 4.6-square-kilometre area near an 11th-century Hindu temple. EPA/STR
Bangkok/Phnom Penh - The gathering of South-East Asian leaders in Jakarta this weekend promises more drama than past summits, which are not usually known for their diplomatic fireworks.
The Association of South-East Asian Nations (ASEAN) summit will bring together Cambodian Prime Minister Hun Sen and his Thai counterpart Abhisit Vejjajiva, whose armies last month clashed on their common border leaving eight soldiers dead on each side, and around 70 wounded.
Fighting at the Thai-Cambodian border has flared on and off for the past three years since UNESCO named the Cambodian border temple of Preah Vihear a World Heritage Site, due to an ongoing dispute over a 4.6-square-kilometre plot of land adjacent to the 11th-century Hindu monument.
Indonesia, this year's ASEAN chair, has taken an unusually proactive role in trying to resolve the border spat, but few observers expect a breakthrough this weekend.
Indonesia's offer last February to post observers in the disputed border zone in a bid to mitigate fighting has run into obstacles.
The Thai cabinet on Tuesday agreed to the Indonesian observers, but on the condition that Cambodian troops withdraw from the Preah Vihear temple complex.
That condition was 'not acceptable,' Cambodian Foreign Ministry spokesman Koy Kuong said. 'Cambodian soldiers cannot be removed from Cambodian territory. As Prime Minister Hun Sen has repeated again and again: both sides can stay where they are.'
It is unlikely that Hun Sen and Abhisit will hold bilateral talks on the sidelines of the summit. Abhisit said Wednesday he would not meet separately with Hun Sen, insisting that the recent border clash was far from coincidental.
'This was an intentional effort to internationalize the issue,' Abhisit said. Thailand has insisted the issue is strictly a bilateral one.
'There will be thousands of media (at the summit). It's always a good place to present your case to the public,' said one senior Thai government official, who requested anonymity.
Hun Sen has a history of spicing up ASEAN summits. At the 2009 summit in Hua Hin, Thailand, he announced his appointment of former Thai premier Thaksin Shinawatra as an economic adviser.
Thaksin, who lives abroad to escape a two-year jail term, is also the political nemesis of Abhisit's government.
Relations between Thailand and Cambodia have been poor since.
'I think, politically speaking, it is clear that the Cambodian government have pretty much written off relationships with this government,' the Thai official said.
Hun Sen has little to lose in antagonizing Abhisit, leader of the ruling Democrat Party. Thailand is heading for an election in June or July, and it is possible that the opposition Puea Thai party, which Thaksin still leads de facto, could win.
Between now and the Thai election, Cambodia is likely to be pushing for an international solution to the border issue.
Besides any plans it may have for the ASEAN summit, Cambodia on April 28 appealed to the International Court of Justice (ICJ) in The Hague to revisit its 1962 ruling over Preah Vihear.
The court ruled the temple to be under Cambodian sovereignty, but at the time turned down a Cambodian request to rule on where the common border lay in the temple's vicinity, leaving that up to the two countries to decide.
Five decades later the two neighbours are still fighting over the 4.6-square-kilometre plot of land.
Now Cambodia wants the court to clarify its earlier ruling in relation to that land. Thailand has set up a legal team to make its case.
The two governments are likely also to lock horns over the temple at UNESCO's annual World Heritage committee meeting in June.
Observers have expressed concern that by getting the ICJ involved at this stage, Cambodia may be undermining ASEAN's efforts to mediate in the crisis.
'There is a danger of forum shopping (by Cambodia) which could distract attention from the ASEAN role,' said one Phnom Penh-based western diplomat, adding that the proposal to station border monitors might well prevent fighting but would not solve the issue.
'If you don't find a political way to resolve it then there is a risk of freezing, and right now the prospect of serious discussions ahead of Thailand's election seems quite small,' he added.
Posted by CAAI News Media at 11:26 pm