via CAAI
Thursday, 05 May 2011
By NNT
BANGKOK, 3 May 2011 – The Ministry of Foreign Affairs has confirmed that coordination has been continually made with the Cambodian government on the assistance for two Thai nationals in the Cambodian jail over spy charges.
A group of senators recently called for the Foreign Ministry to expedite help for Mr Weera Somkwamkid and Ms Ratree Pipattanapaiboon, who had been detained at Prey Sar Prison in Phnom Penh for over four months for illegal entry and espionage. As a response, Secretary to the Foreign Minister Chavanond Intarakomalyasut insisted that the Ministry had been cooperating with the Cambodian side on a constant basis in aid of the two. 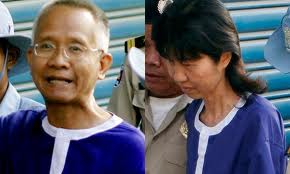 He pointed out that the Thai Embassy in Phnom Penh had been delivering meals and necessities to them every day and had been following up their health conditions closely.
Mr Chavanond admitted that the latest series of clashes along the Thai-Cambodian border had complicated Thailand’s communication with the neighboring country. Nonetheless, he said the Foreign Ministry had never neglected the two Thai detainees.
Furthermore, the Secretary announced that permission had been granted by Cambodia for any person from Thailand to pay a visit to the detainees on Fridays without the need to notify the Cambodian Interior Ministry in advance.
Posted by CAAI News Media at 3:36 pm