via CAAI
Published: 4/05/2011
Online news: News
Two checkpoints on the Thai-Cambodian border, in Surin and Si Sa Ket, re-open on Wednesday after local military leaders of both countries held another round of ceasefire talks. 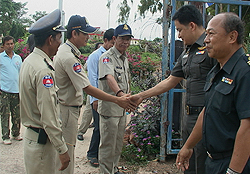 Photo by Nopparat Kingkaew
The Chong Jom - O-Smach immigration checkpoints in Surin's Kap Choeng district was reopened at 10am Wednesday.
Field reports said Lt-Gen Tawatchai Samutsakhon, the 2nd Army commander, went across the border to meet Lt-Gen Chea Mon, commander of Cambodia's 4th Army Region, at the O-Smach Resort Hotel not far from the crossing.
The two military commanders discussed strict implementation of a ceasefire. They agreed that if there is a clash then the unit commanders of the two sides must immediately contact each other to stop it and prevent it from recurring.
They also agreed to re-open the Chong Jom - O-Smach immigration checkpoint.
After the talks, Lt-Gen Tawatchai flew by helicopter to visit wounded soldiers at a military hospital in Surin province.
The Chong Jom - O-Smach crossing was subsequently opened at 10am to the relief of traders on both sides of the border. It had been closed for 13 days, halting cross-border trade and leaving them without an income.
Both Thai and Cambodian traders were expected to fully resume business in Chong Jom - O-Smach tomorrow.
In Si Sa Ket's Phu Sing district, the Chong Sa-ngam border checkpoint was re-opened, 13 days after after being closed because of fighting on the border.
Si Sa Ket governor Somsak Suwansucharit said he ordered the reopening of Chong Sa-ngam crossing at 1.30pm. It was closed on April 22.
However, all was still quiet at the crossing today. It was expected border trade would fully resume on Sunday, May 8, Mr Somsak said.
Posted by CAAI News Media at 12:56 am