Quiet falls on the front 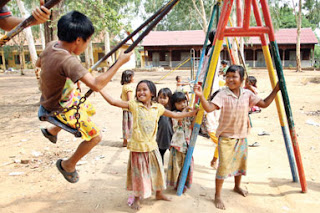 Photo by: Sovan Philong
Children play yesterday at Kou Pagoda in Oddar Meanchey province’s Banteay Ampil district before returning to their villages later in the day amidst a lull in fighting along the Thai-Cambodian border.
http://www.phnompenhpost.com/

Thursday, 05 May 2011 15:03 Cheang Sokha and May Titthara
Oddar Meanchey province
Guns have fallen silent at the border between Thailand and Cambodia, as yet another ceasefire was signed yesterday and returning villagers vowed to dig trenches and take up arms to protect themselves from future clashes.
Prime Minister Hun Sen said yesterday morning, at the inauguration of a pagoda in Phnom Penh, that a lull in fighting following clashes on Tuesday heralded the first night of peace since hostilities broke out between Thailand and Cambodia on April 22.
The clashes have killed at least 18 people so far.
The premier said that frontline troops stationed near to Ta Moan and Ta Krabey temple had slept soundly in Oddar Meanchey province on Tuesday night.
In two instances, he said, unarmed soliders from each country slept side-by-side at the same locations.
“The frontline soldiers should build trust with each other, and if that happens there will be no more fighting,” Hun Sen said.
“We don’t want to have war. War brings disaster – not only for the lives of the soldiers but also the lives of civilians.”
Yesterday morning, according to a statement from the Ministry of Defence, Cambodian major general Chea Morn and his Thai counterpart, commander Thawatchai Samutsakorn, met to affirm a ceasefire which was first brokered last Thursday.
A six-point agreement was reached. It included the provision of a complete ceasefire, moves to build trust between the two sides and the reopening of two border checkpoints in Oddar Meanchey province at O’Smach and Choam-Sangam. A soldier based at Ta Moan temple, the scene of fierce fighting over the past week, said another military meeting between representatives from the two nations was due to take place today. 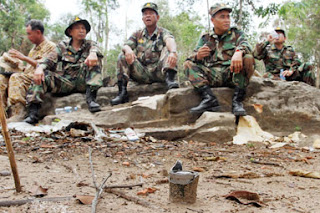 Photo by: Sovan Philong
Royal Cambodian Armed Forces commanders sit near the remnants of a shell during a visit yesterday to an area near Ta Moan temple in Oddar Meanchey province, along the Thai-Cambodian border.
Veerachon Sukondhadhpatipak, deputy spokesman of the Royal Thai Army, warned yesterday that is was too early to be sure that a ceasefire would hold.
“We hope that this situation, which is quiet at the moment, will last a little bit longer and will continue. Every time we’ve had the so-called ceasefire, it’s not very long and the situation occurs again, so let’s wait and see,” he said.
Regardless, many of the estimated 45,232 Cambodians forced out by the clashes continued to flood back towards the frontline yesterday.
Around 150 evacuees from two villages in Kokmon commune, in Oddar Meanchey’s Banteay Ampil district, returned home. Another 150 villagers, living close to the front line in Thmo Daun and Hanoukman villages, also moved back, some to a scene of destruction.
Thmo Daun resident Siek Chhouk fled her home on April 22. She returned yesterday to discover it had been damaged in the conflict.
“I am so regretful about my home. If fighting breaks out again I will not go out of my village. I will go to ask for a gun from soldiers to fight back with Thailand,” she said. 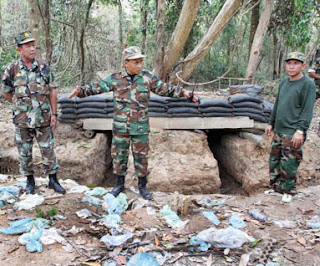 Photo by: Sovan Philong
An RCAF commander speaks in front of a bunker during a visit yesterday to an area near Ta Moan temple where recent hostilities have taken place.
While fellow resident Leng Srey, preparing her luggage before taking a truck home to Thmo Daun, said she intended to dig a trench at her property to keep her safe in the future.
However, officials have assured residents of their safety.
Bich Sokhen, Banteay Ampil provincial governor, said yesterday: “There is no one place in Oddar Meanchey province that is unsafe – everything has been finished.”
Experts are now investigating the weapons used during the clashes.
The director general of the Cambodian Mine Action Centre, Heng Ratana, said yesterday that two bombs were being analysed. No evidence of cluster bombs use has been found as yet, he said.
Posted by CAAI News Media at 11:18 pm