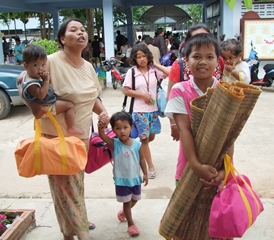 
via CAAI
SURIN, May 4 – Tensions along the Thai-Cambodian border have now relaxed and the troops of both sides have pledged to resolve the border dispute by negotiation, Thai Army Region 2 commander Lt-Gen Thawatchai Samutsakorn said on Wednesday.
The Thai regional military commander said after visiting soldiers injured in the clashes which erupted April 22, when both parties used heavy weapons causing casualties among the troops and residents of the two countries.
Gen Thawatchai said the situation has now eased since no heavy weapons such as artillery or rocket launchers have been used recently.
"Today I have talked with the Cambodian field commander and urged him to avoid any possible clash," Gen Thawatchai stated. "If any misunderstanding does occur, both sides will talk to solve the conflict and reduce suspicion."
Gen Thawatchai reported that there were no clashes Tuesday night.
Meanwhile, the Thai-Cambodian border at the Chong Chom crossing in Surin province reopened this morning to allow trading to resume.
The Thai commander said that re-opening the border pass would allow people on both sides of the border to resume their normal life, while affirming the opening or closure of border pass will not be a condition to pressure Cambodia to stop shooting.
In other developments, Thai Foreign Minister Kasit Piromya said Wednesday that Thai ambassador to the Hague Weerachai Palasai will head the Thai delegation in contesting the case reopened by Cambodia at the International Court of Justice seeking to clarify the 1962 ruling on the land surrounding Preah Vihear temple.
Mr Kasit, who has just returned from a Geneva meeting with the three newly-appointed legal advisers from Australia, Canada and France, said Thailand and Cambodia are scheduled to clarify the matter to the court on May 30-31 focusing on the provisional measures requested by Cambodia.
Cambodia has urged the court to interpret its 1962 judgment regarding Preah Vihear temple, as well as issue an urgent indication for provisional measures including an immediate and unconditional withdrawal of Thai troops from the contested land near the temple and the ban of all Thai military activity in the area.
The Thai legal team comprises 15 persons including three foreigners and foreign ministry officials, Mr Kasit said.
After the verbal clarification to the court, Mr Kasit said, it will take about four to five months to complete the written statement to be submitted. The ruling is expected after New Year. (MCOT online news)
Posted by CAAI News Media at 1:04 am