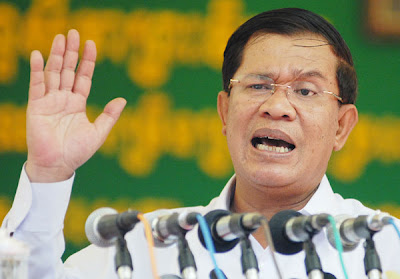 
via CAAI
Wednesday, 04 May 2011 15:52Cheang Sokha
LAST night saw no shooting at the border, Prime Minister Hun Sen said today, in what was the first night of peace since hostilities broke out between Thailand and Cambodia on Aprill 22.
Speaking at the inauguration ceremony of a pagoda in Phnom Penh, the Premier said that troops from Cambodia and Thailand stationed near to Ta Moan and Ta Krabey temple had slept soundly at the frontline.
In two instances, he said, unarmed soliders from each country even slept side-by-side at the same locations.
“The frontline soldiers should build trust to each other, and if that happens there will be no more fighting,” he said.
Today, according to a statement from the Ministry of Defence, regional commanders again met to affirm a ceasefire. A six-point agreement was reached. It included the reopening of two border checkpoints in Oddar Meanchey province.
Posted by CAAI News Media at 12:22 am