Ieng Sary back in courtroom 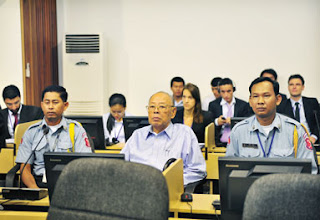 Photo by: Eccc/Pool
Ieng Sary, who was deputy prime minister and foreign minister during the rule of the Khmer Rouge, sits through a hearing at the Khmer Rouge Tribunal yesterday.
http://www.phnompenhpost.com/


via CAAI
Thursday, 05 May 2011 15:02 James O'Toole
A feeble Ieng Sary appeared before Cambodia’s war crimes tribunal yesterday to challenge his provisional detention ahead of his looming trial alongside three other senior Khmer Rouge leaders.
Lawyers for the former KR foreign minister argued that judges had not rendered a sufficiently reasoned decision on the defence appeal of last year’s indictment within the window during which the court could still compel their client’s detention. The maximum time limit for pre-trial detention since Ieng Sary’s 2007 arrest has therefore now lapsed, the defence said.
The challenge follows appeals earlier this year on similar grounds by the other three defendants set to be tried in the court’s second case: former KR head of state Khieu Samphan, Brother No 2 Nuon Chea and Social Action Minister Ieng Thirith. These appeals have been rejected.
Despite this precedent, defence lawyer Ang Udom told the court yesterday that there was no legal basis to continue Ieng Sary’s detention.
“Mr Ieng Sary has the presumption of innocence and has not been convicted of any crime,” Ang Udom said.
“The most suitable remedy is to release Mr Ieng Sary on bail immediately.”
The defence recommended that Ieng Sary be released from the court’s detention facility and placed under house arrest at his expansive home in Phnom Penh.
“Brother No 3” himself, now 85 years old, managed less than an hour in court yesterday before asking to leave due to fatigue. His lawyers have requested that the court conduct his upcoming trial in half-day sessions in view of his health concerns.
Donning the loose-fitting button-down shirt of the style he has worn in previous hearings, he appeared fatigued and at one point seemed to doze off as his lawyers spoke in front of him. Early in the session, the defence asked that he be given leave for a bathroom break.
Much of the argument yesterday followed the template of previous hearings on pre-trial detention. At one point, however, defence lawyer Michael Karnavas provided a sample of the debate over Cambodia’s complicated history with the West that is sure to come at greater length in the upcoming trial.
Responding to comments from deputy prosecutor Veng Huot, who noted in passing statements of support for the tribunal from United Nations secretary general Ban Ki-moon and American secretary of state Hillary Clinton, Karnavas said the UN was not “in any position to be lecturing”, given its support for the Khmer Rouge for years following their 1979 overthrow.
“I do believe that we should be entitled to talk about the carpet bombing, by the United States, of Cambodia. We should be able to talk about the UN’s involvement after 1979,” Karnavas said, accusing UN officials of limiting the court’s jurisdiction to events between 1975 and 1979 “to ensure that those issues were not properly vented out”.
Posted by CAAI News Media at 11:12 pm