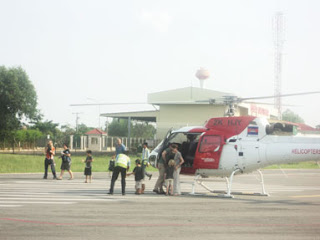 
via CAAI
Wednesday, 04 May 2011 15:02Michael Sloan and Peter Olszewski
International superstar Angelina Jolie was spotted at Siem Reap airport yesterday after an advertisement shoot for luxury brand Luis Vuitton reportedly finished.
Accompanied by her children, including adopted Cambodian-born son Maddox, Jolie was seen exiting a helicopter late in the afternoon.
A small number of tourists watched on – before security guards brought out screens to shield the family – as the group was whisked away in a mini-van and two four-wheeled drives, complete with darkened windows.
The drivers were wearing uniforms of Siem Reap’s exclusive Amansara hotel.
A well-placed source said Jolie had flown from Siem Reap to Battambang province in the morning and returned later that day.
In 2003, the mega-star founded an NGO called the Maddox Jolie-Pitt Foundation, which operates out of Battambang province. It tackles conservation, education and infrastructure projects in the area.
Yesterday, the foundation’s human resources manager said he could not comment on Jolie as he had been on leave.
The star of Lara Croft: Tomb Raider is thought to have arrived in Cambodia on Saturday for filming after a production team scouted out potential locations.
An advert was shot on the banks of a Siem Reap river while an interview for Louis Vuitton was also filmed, said a source close to the shoot who wished to remain anonymous.
Khmer Mekong Films provided the back-up production for the shoot.
The filming was yesterday hailed as a boon for the Kingdom’s film production sector by Cedric Eloy, chief economic officer of the Cambodian Film Commission. “This shows that Cambodia is a safe place to shoot movies,” he said. “In some quarters it still has the image of a place with violence, but projects like this will help to change the image.
“We’ve had six feature films shot in Cambodia in the last six months, and the film industry is opening Cambodia up to the world,” he added.
Posted by CAAI News Media at 12:13 am