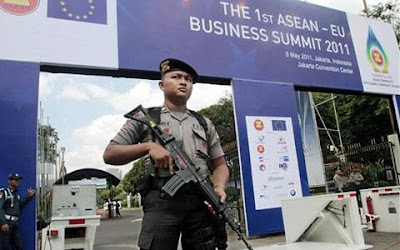 Photo: AP
An armed police officer stands guard outside the venue of the 18th ASEAN Summit - will be held on May 7-8 in Jakarta, Indonesia, May 4, 2011.
"Of course the development in Thailand, on the border of Thailand and Cambodia is one of major issues developing in our region."
Leaders from the Association of Southeast Asian Nations are gathering this week in Jakarta (May 5-8) to discuss regional economic development and mutual security issues.
Indonesia's Foreign Ministry's spokesman Michael Tene says ASEAN's role in trying to end an ongoing border conflict between Thailand and Cambodia will almost certainly be addressed when the heads of state meet May 7.
"Of course the development in Thailand, on the border of Thailand and Cambodia is one of major issues developing in our region. So it will be very natural I believe that such issues will be taken up in the summit," he said.
Indonesia took over the chairmanship of the group of 10 Southeast Asian nations this year and made it a stated goal to transform the organization from a loose association to an active participant in global economic and security matters.
But in February clashes erupted between two ASEAN members, Thailand and Cambodia. The two armies have been fighting sporadically over an area surrounding a Hindu Khmer temple, a historical landmark that both countries claim as part of their heritage.
As head of ASEAN, Indonesian Foreign Minister Marty Natalegawa saw this conflict as a test case for what the organization leadership could achieve and he has actively tried to negotiate an end to the conflict. So far his efforts have been unsuccessful, but ASEAN Secretary General Surin Pitsuwan says Natalegawa should get credit for his unprecedented diplomatic efforts.
"There has never been one single special meeting of the foreign ministers on an issue between states before, ever. We have made history under Indonesia. There has never been an attempt by the chair to go to the two capitals and holding hands and talking and try to convince that this is something that we will have to work out together," said Pitsuwan.
He says in addition to continuing to resolve the Thai-Cambodia border conflict, leaders at the summit will also likely discuss how to build on Indonesia's efforts to make ASEAN an integrated economic and political community in the future.
Posted by CAAI News Media at 4:02 pm